Ladies and Gentlemen, the next Black Death, a global pandemic of catastrophic proportions, has reared its ugly head in the Far East, home to many pandemic viruses. This time it is not a 30 per cent death rate, it is an 85 per cent death rate. It is called the Cambodian Avian Flu virus. 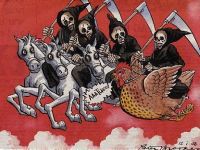 Avian Flu has been around for centuries. So have other pandemics. But an 85 per cent mortality rate?

Let us not invent, let us use the World Health Organization's communications:

9 February 2011 - The Ministry of Health of Cambodia has announced a new confirmed case of human infection with avian influenza A (H5N1) virus.

The 5 year old female, from Prek Leap village, Sangkat Prek Leap, Khan Reussey Keo, Phnom Penh, developed symptoms on 29 January, was admitted to a hospital on 3 February and died 12 hours following admission. The presence of H5N1 virus in nasopharyngeal specimens was confirmed by Institut Pasteur, the National Influenza Centre in Cambodia. The case had been in contact with sick poultry during the 7 days before onset of symptoms.

The Ministry of Health has been coordinating the response. Actions have included contact tracing, collecting specimens from suspected cases, and providing oseltamivir prophylaxis to close contacts; active surveillance and joint investigation with animal health authorities; community education; and public communications coordination with the assistance of WHO.

Of the 11 cases of human H5N1 virus infection confirmed since 2005 in Cambodia, 9 have been fatal.

25 February 2011 - The Ministry of Health of Cambodia has announced 2 new confirmed cases of human infection with avian influenza A (H5N1) virus.

A 19-year-old female, from Takong village, Ta Kong commune, Malay district, Banteay Meanchey Province, developed symptoms on early hours of 5 February, was admitted to a private clinic on 9 February, referred to a hospital on 12 February, and died on 12 February without avian influenza being considered as a diagnosis. She had travelled from her home with her husband, her 11-month old son, her mother in law and her sister in law to Rokar Chor village, Bantey Chakrey commune, Prash Sdach district, Prey Veng Province on 3 January. She had multiple exposures to sick and dead poultry between the second half of January and early February. A blood specimen collected at hospital on 12 February was transferred to Institut Pasteur du Cambodge on 22 February and tested positive by (polymerase chain reaction) PCR.

The 11-month-old son developed symptoms on 5 February, was admitted to hospital 15 February and died on 17 February. He also had multiple exposures to sick and dead poultry in the same time frame. The presence of H5N1 virus in nasopharyngeal specimens was confirmed by Institut Pasteur du Cambodge, the National Influenza Centre on 20 February.

The Ministry of Health has been coordinating the response with assistance from WHO. To date no other symptomatic contacts have been found.

Of the 13 cases of human H5N1 virus infection confirmed since 2005 in Cambodia, 11 have been fatal.