A new word is launched in Russia: a Marsonaut. The six members of the simulation programme for a visit to Mars have started the third phase of the experiment, namely a Mars landing followed by the first Mars walk. The Russian flag now flies firmly and proudly on the Red Planet! 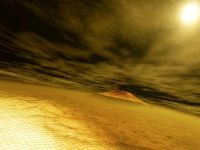 Work is under way in Russia in the first active tests in the simulation phase of the manned space flight to Mars. The multinational crew of the Mars500 programme has finally landed on the Red Planet and today took their first steps outside, after being sealed inside a simulated spaceship for six months. Next target: an all-woman mission to Mars!

On Saturday the six-man crew - three Russians, an Italian, a Frenchman and a Chinese - touched down on the simulated surface of the Red Planet in a specially designed biosphere in Moscow after a six-month journey across "space" sealed in a transportation capsule. The touchdown was successfully completed at noon MSK (15.00 GMT) after the journey without sunlight or access to fresh water.

The project, which started on June 3 last year, is organised by the European Space Agency and the Russian Institute of Biomedical Affairs and is designed to study how the human body will manage in the extreme conditions of a 520-day mission to Mars. The project simulates all aspects of a manned return flight to Mars (250-day outward trip, a 30-day stay and a 240-day return trip) except for radiation and weightlessness and the module contains a living area, a warehouse, a mini-garden and a laboratory.

The six participants, led by Russian "cosmonaut" Aleksei Sityov were chosen from a total of 6,000 people from 40 countries. They are:

Alexey Sergevich Sitev, Russian engineer and commander of the mission

They will receive 100,000 USD each for their participation in the program.

On Monday the first Mars walk took place. Marsonauts Aleksandr Smoleevskiy and Diego Urbina put on their space suits and stepped onto the surface of the Red Planet, spending around an hour and a half exploring the surface. An important part of the mission was the planting of the Russian and Chinese flags on the surface, along with the flag of the European Space Agency.

Other walks in the coming days will simulate the search for water, and emergency situations such as a sandstorm or a meteor shower. The simulated exercise will terminate on February 23.