The Earth's magnetic pole is inexplicably shifting, creating unstoppable forces generating monster storms which we have seen at the beginning of 2011. There is evidence that a cycle of super-storms has started, the latest being the gigantic ice storm across North America. Is this the beginning of a new Ice Age? 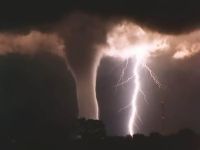 Frightening new evidence begins to surface about the Earth's wobble, its effect on the climate and the beginning of a new Ice Age, heralded by a series of monster storms such as those unleashed on the UK in late 2010, the USA before Christmas and now again at the beginning of February and Eastern Australia, first with its worst flooding ever and then with a Category 5 hurricane.

The latest storm to hit the USA has affected 150 million people and stretches across 2,000 miles of territory, according to the research presented in the article "Magnetic polar shifts causing massive global superstorms"*. In Australia, unprecedented rains saw sharks swimming along the streets of towns and so much water fell, that "Shocked authorities now numbly concede that some of the water may never dissipate and have wearily resigned themselves to the possibility that region will now contain a small inland sea".

Then struck Yasi with its winds of almost 200 mph - 22 per cent faster that a Category 5 hurricane. "Yet Yasi may only be a foretaste of future super-storms. Some climate researchers, monitoring the rapidly shifting magnetic field, are predicting super-storms in the future with winds as high as 300 to 400mph," states researcher Terrence Aym.

According to the research, a change in the Sun's electromagnetic field is reacting with the Earth's, having an effect not only on the Earth's magnetosphere, but also its wobble, the dynamics of its core, the Ocean currents and the weather. The result is that the Earth's magnetic core has been shifting 40 miles to the East annually over the last decade, as opposed to the 5-mile average. Worse, it is accelerating.

Terrence Aym reveals NASA reports which indicate the Earth's magnetic field now shows cracks, affecting the ionosphere and troposphere wind patterns; the work also quotes the Federal Agency NOAA, which "issued a report caused a flurry of panic when they predicted that mammoth superstorms in the future could wipe out most of California."

Even more worrying is the quote from The Economist in a detailed article about the magnetic field: "There is, however, a growing body of evidence that the Earth's magnetic

field is about to disappear, at least for a while. The geological record shows that it flips from time to time, with the south pole becoming the north, and vice versa. On average, such reversals take place every 500,000 years, but there is no discernible pattern. Flips have happened as close together as 50,000 years, though the last one was 780,000 years ago. But, as discussed at the Greenland Space Science Symposium, held in Kangerlussuaq this week, the signs are that another flip is coming soon."

Not only that...all the signs are there for the beginning of a new Ice Age.