April 13, 2036 is the date of impact when the asteroid Apophis will smash into the Earth with the force of 50 million Hiroshima bombs, according to research based on predictions by Russian scientists. This is more than another scare story: so many scientists agree that a major international conference has been called. 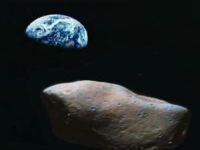 In his work "Astronomers now predict killer asteroid will hit Earth in 2036", US based researcher and writer Terrence Aym* quotes Russian Professor Leonid Sokolov, of St. Petersburg State University, who stated in a TV interview recently that "It is likely a collision with Earth may occur on April 13, 2036" with the asteroid Apophis.

Aym points out that Apophis is the Greek name for the Egyptian God Apep, or "The Uncreator".

This is not empty scare mongering. More and more scientists recognise the danger is real, so many that a major international summit has been convened. Anatoly Perminov, the head of the Russian Federal Space Agency Roscosmos stated in an official press release. "Russian space officials and members of the European Commission will meet in early July to discuss joining forces against thousands of potentially hazardous asteroids."

Until 2004, according to the work, Apophis had not been seen, however in the last seven years it has been recognised as the most severe threat to our planet, and to quote Terrence Aym, "the most imminent threat to the human race".

The trajectory of Apophis has created a split in the international scientific community: the Russians and Europeans are increasingly concerned, while NASA astronomers play down the chances of a collision. Whatever the case, what is the plan in the event of a catastrophic strike, a repeat of the Yucatan asteroid impact 65 million years ago which wiped out most of the larger species on Earth?

To be succinct, there isn't one. Russia and the European Union will launch a joint asteroid project in a meeting to be held on July 7, 2011, between the European Commission and scientists and engineers from the Russian Federal Space Agency, the Russian Academy of Sciences and representatives of other scientific and civil Institutions.

The Russian Space Agency Roscosmos, according to the work, has calculated that such an impact would not only cause massive climate change but worse, with an impact the equivalent of one million megatons of TNT (50 million Hiroshima bombs), would annihilate modern civilization. Terrence Aym writes that a crater with a diameter of one thousand kilometres would be created and the dust thrown up into the atmosphere would blot out the Sun, creating a nuclear-type Winter lasting up to tens of thousands of years.

The work continues with an ominous quotation from the Russian specialist: "In recent years, the attention of scientists, technicians, politicians and the military has become increasingly focused on the asteroid and comet hazard, namely the threat of the Earth's collision with large space bodies," Perminov stated. "It is caused by the fact that special supervision programs led to a dramatic increase in the number of such objects being detected, and the new information allowed to gain a new insight into the problem."

Author`s name Timothy Bancroft-Hinchey
*
18:01
Putin: Merkel confirmed Russia made the right decision
15:58
Merkel's remarks about Minsk Agreements were 'petty and disgusting' – Lukashenko
15:02
Viktor Bout says he did not come across Russophobia in US prisons
12:02
Massive fire burns OBI hypermarket at Mega Khimki Shopping Mall to the ground
16:48
US basketball player Brittney Griner exchanged for Russian entrepreneur Viktor Bout
16:31
Zelensky believes Ukraine conflict may end in 2023
20:46
The West is expecting, but not pressing Russia-Ukraine talks
18:27
Putin: The threat of the nuclear war is rising, why deny it
17:17
Ukraine modenises Soviet Tu-141 Strizh drones
15:24
Ukrainian combat drones capable of flying at speed of sound may strike Siberia
Polish writer shocked to find out Russians will not rise to topple Putin