The Russian heat wave figured among the world's extreme weather conditions in 2010, the warmest year on record, according to the United Nations' World Meteorological Organization. Meanwhile the Arctic ice cover reached its lowest point, 1.35 million km. below the mean for this time of year. 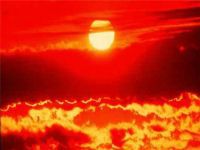 Along with 1998 and 2005, 2010 ranked as the hottest year on record, according to the World Meteorological Organization bulletin issued on January 20, which claims "The year witnessed a large number of extreme weather events, including the heat wave in Russia and the devastating floods in Pakistan".

The WMO informs that "In 2010, the global average temperature was 0.53 degrees Celsius (0.95 degrees Fahrenheit) above the mean for the period from 1961 to 1990," which is the reference period for the Geneva-based WMO. Coupled with the warm land temperatures, the sea-ice cover in the Arctic was the lowest ever since records began. The average monthly area was 12 million kilometres, which is 1.35 million km. below the average for December from 1979 to 2000.

Michael Jarraud, the Secretary-General of the World Meteorological Organization, points out that the ten warmest years on record all occurred after 1998 and "The 2010 data confirm the Earth's significant long-term warming trend". The year 2010 was described by the WMO as being "exceptionally warm". Large parts of Africa, Asia, Greenland and Arctic Canada registered their warmest temperatures on record and December was exceptionally warm in Greenland and Eastern Canada.

However, on the contrary, parts of Europe registered temperatures ten degrees Celsius below the mean. Northern and Western Europe experienced "abnormally cold" temperatures, while parts of Scandinavia registered their coldest December since records began. In central England, the temperatures were the lowest since the late XIX century and parts of Russia and the Eastern USA also recorded lower than average temperatures.

The WMO registered a number of extreme weather events in 2010 and early 2011, namely the Russian heatwave, the Pakistani monsoon floods, which severely affected 20 million people, the January floods in Sri Lanka, displacing 800,000, the floods in Rio de Janeiro, Brazil, resulting in 700 deaths and the worst natural disaster in Australia's history, the severe flooding in Queensland.