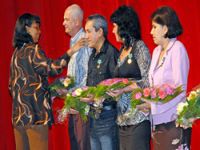 The Day of Cuban science is celebrated today with a program of activities focused on the significant contributions to the social and technological development of Cuba and the International Year of Chemistry. Decided in 1960, the date honors a proclamation from the leader of Cuban Revolution, Fidel Castro, who on that occasion said: "The future of our country must necessarily be a future of scientists, men of thought."

Since then, science has had a rapid development in Cuba, with several research projects that seek to protect the environment, improve human health and technical development.

The past year has brought important advances in the field of health, with the implementation of new products, including a therapeutic vaccine against lung cancer and advanced lung and anti-meningococcal conjugated groups against groups A and C.

Other significant developments in this sector are the anti-hemorrhoid drug containing recombinant streptokinase and interferon alfa, according to recent data from experts from the Ministry of Science, Technology and Environment.

Scientific institutions across the island are to join the celebrations with various proposals, especially educational ones, to raise awareness and promote the care and preservation of the environment.

Among the most attractive are those organized by the Museum of Natural History of the City Historian's Office, with lectures, debates and conferences.

Educational audiovisual presentations, academic exchanges and the opening of the exhibition focusing on scientific subjects completed the program.

The Cuban Science Day celebrations are included as part of the International Year of Chemistry, established by the United Nations with the contributions from this sector for the welfare of humanity.

It is also a tribute to Polish scientist Marie Curie (1867-1934) who discovered radioactivity and the first woman to win two Nobel Prizes, the first in 1902 for that research and another eight years later for the discovery of the chemical elements radium and polonium.