UN Secretary-General Ban Ki-Moon outlines the United Nations Organization's eight top priorities for the new year, ranging from empowering women to fighting nuclear terrorism. Ban Ki-Moon predicts that 2011 will be even more challenging that 2010 and calls on the "unrelenting determination" of the international community. 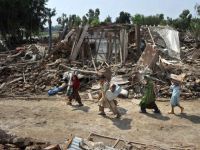 The top eight priorities for the UNO, as laid out by Ban Ki-Moon in his address to the UN General Assembly on Friday, are sustainable development, climate change, empowerment of women, a safer world, advancing human rights, responding to major humanitarian crises, disarmament and non-proliferation and strengthening the UNO.

The first goal prioritised by the Secretary-General is inclusive and sustainable development, with the extra challenge of facing a global recession. He stated that "People are worried about their jobs, their security, their children's future, referring to May's upcoming UN Conference in Istanbul, Turkey, which will promote a 10-year Programme of Action for food security, working conditions, disaster risk reduction, resistance to climate change and clean energy growth in the least developed countries.

As for the second goal, climate change, Ban Ki-Moon praised the advances made in the meeting in Cancun, Mexico on the reduction in greenhouse gas emissions, forest protection, technology, adaptation and climate financing.

As regards empowerment of women, the UN Secretary-General pledges full participation of women, increasing their number in top UN positions, along with gender equality and promises to fight against violence against women. "Take any issue," he stated, "climate change, development, peace and security; when women are part of the vision, the world sees better results".

The fourth priority is a safer and more secure world. Ban Ki-Moon mentioned the situation in Ivory Coast, the peace operations in south Sudan and in Darfur.

Advancing human rights is fifth on the list, followed by a better response to humanitarian disasters. Ban Ki-moon used as a reference the situation in Haiti and the floods in Pakistan last summer. "We continue to hone our capacities and better coordinate our efforts. We must do more to ensure the most effective use of resources and the most efficient management of a truly global response to crises," said the Secretary-General.

Disarmament and the non-proliferation of nuclear weapons were the focus of last year's Nuclear Non-Proliferation Treaty conference review, Ban Ki-Moon pointed out, referring also to the START treaty signed between the Russian Federation and the USA, claiming that "we will redouble our efforts to settle issues concerning nuclear security and nuclear terrorism".

Finally, concerning the strengthening of the UNO from within, he stated "All of us will benefit from a United Nations that is ever more transparent, more accountable, more efficient, effective and mobile".

Noble aims and claims. However, the United Nations Organization can only ever be as strong or efficient or useful as the collective goodwill in the international community to support it. Already this century in 2003 we had a classic example of a clique of nations which unilaterally decided to flout international law and deride the UN Charter by illegally attacking Iraq. If the international community is to bypass the UNO and its laws like that, how much use can it be, the more so when countries pledge financing for its humanitarian programmes and then do not deliver?