One million people severely affected in Sri Lanka, 370 dead in Brazil and large swathes of Queensland, Australia, looking more like a sea. What is responsible for these most extreme of extreme conditions? Is it mankind's activity or is it Mother Nature? 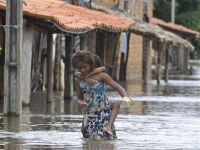 Among these three catastrophes, it is difficult to say which is worse than the others. In Sri Lanka, the floods which started some three weeks ago have affected around one million people, left in a situation which the UN describes as creating "strong concern", specially as regards the most vulnerable.

1,081,800 people in Sri Lanka have been affected by the floods. 23 have died and 36 have been injured according to reports received so far. Apart from this, some 325,000 people are displaced and are living in 591 temporary relocation centers. Some areas of the country are so badly affected that the authorities have been unable to access them.

These floods come to a country which has only just started to recover from the 200 tsunami.

After the death of 13 people in São Paulo, Brazil, last week, flash floods again created a calamitous situation in the south-east of the country where to date at least 370 people have died. Severe flooding and mudslides did most of their damage in Nova Friburgo, Teresopolis and Petropolis. Thousands of people are homeless.

Heavy rains on Thursday added to the bad conditions caused by weeks of rainfall, destroying infrastructures, roads, bridges, telecommunications and electricity systems. Hundreds of people are feared dead under the mud and as in Sri Lanka, large areas are virtually cut off. Drinking water is scarce and now there are worries about dengue and other water-borne diseases.

The situation in Queensland, Australia, has been compared to a "post-war" scenario with three-quarters of the state affected. The State Premier Anna Bligh has declared that the State has faced the worst natural disaster in its history, and possibly the worst in the history of Australia. The state capital, Brisbane, is the latest area to be affected, with thousands of homes under water in the 31 suburbs affected. One third of the two million residents have been asked to move out of their homes.

At least 15 people have died, with dozens more missing after a week's severe flooding. 25,000 homes are either totally or partially destroyed. Damage to the agricultural and mining sectors in the state are estimated in the billions.

Do these disasters have a common link? Experts point towards maybe the strongest La Niña event since records began in the nineteenth century. Indeed this event was predicted as early back as last June. La Niña forms when cold South Pacific water pushes warm waters against the Australian coast, creating enormous precipitation.

However, the Sydney Morning Herald quotes David Karoly, of Melbourne University's school of earth sciences, stating that "Australia has been known for more than a hundred years as a land of droughts and flooding rains but what climate change means is Australia becomes a land of more droughts and worse flooding rains".

The link between La Niña and climate change has yet to be properly studied. Could it just be a question of ocean currents or are their other vectors at play? And it does not explain Brazil and Sri Lanka.