The Apocalypse, mass kills and the magnetic pole shift

The myriad of reasons given for the mass deaths of various species of animals around the world is almost as baffling as the events themselves, lending credence to the notion that something very strange is going on. The list of incidents grows by the day and reaches staggering proportions. We must find an answer, and soon. 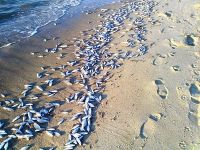 The list of apocalyptic happenings from the end of 2010 to the beginning of 2011 is absolutely staggering:

450 birds dropped out of the sky in Baton Rouge, Lousiana (red-winged blackbirds, cowbirds, grackles and starlings). Why were they flocking together like that?

Thousands of drum fish washed up along a stretch of the Arkansas River some twenty miles long; the explanation was poison but surely that would have been ascertained by now; still no results are available;

Two million small fish dead in Chesapeake Bay, Maryland; the reason they gave was the cold

Thousands of fish in a Florida creek. It cannot have been the cold, the waters were mild;

Dozens of coots (around 200) found dead on a Texas Highway at Big Cypress Creek;

But the killings have not only been in the United States of America. In Stockport, Greater Manchester, England, hundreds of fish have appeared dead on a pond; several other places in north-west England have reported mass fish kills; in southern England, in the county of Kent, 40,000 devil crabs were washed up dead on the sea-shore at Thanet. The reasons given in all these cases were cold weather, but then again it is always cold in Winter and this does not happen;

In Italy, 8,000 doves plummeted from the sky at Faenza. Reason: altitude sickness, poisoning or indigestion caused by greed. But birds do not simply crop till they drop;

In New Zealand hundreds of snapper fish were washed up dead on the beach at Coromandel;

In Sweden, 50 jackdaws fell from the sky at New Year;

In Brazil a huge fish kill (100 tons) was discovered between Paranaguá, Antonina and Guaraqueçaba Pontal in Paraná State, leaving hundreds of fishermen destitute. Now surely this cannot have been due to cold water, Brazil is in mid-Summer.

One theory being postulated tentatively at present is the shift of the Magnetic North Pole eastwards towards Russia. However, this does not take into account the fact that the magnetic pole is constantly shifting in loops some 50 miles wide every day although the movement does appear to be accelerating and has been doing so for several years.

Could this be the explanation? Certainly it is better than saying birds died of altitude sickness and indigestion through greed...