Fresh research from scientists working in a wide range of areas points towards an alarming new discovery: the advent of an ice storm, the result of a convergence of two massive cooling systems. The question now arises, could the Arkansas blackbirds have been responding to some invisible threat? 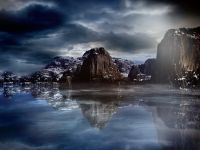 In his research article "Experts: Food and fuel shortages imminent as new Ice Age dawns", US based analyst and writer Terrence Aym * examines work from researchers working in the fields of geology, ecology, meteorology, astrophysics, and heliology which points towards a horrifying new scenario: the convergence of two massive cooling cycles, the beginnings of a new Ice Age.

"With an Ice Age comes abrupt change, and with change comes death-sometimes death on a massive scale" claims the author. What is worse, according to Terrence Aym, is the timing of the event, since both periods are due when the Sun reaches and passes its solar maximum, leading to a 30- to 50-year period of cooling.

Terrence Aym then goes on, not with personal opinions, but with the declarations of scientists, such as John L. Casey, the Director of the Space and Science Research Center, who he quotes as saying: "The Earth typically makes adjustments in major temperature spikes within two to three years. In this case as we cool down from El Nino, we are dealing with the combined effects of this planetary thermodynamic normalization and the influence of the more powerful underlying global temperature downturn brought on by the solar hibernation. Both forces will present the first opportunity since the period of Sun-caused global warming period ended to witness obvious harmful agricultural impacts of the new cold climate. Analysis shows that food and crop derived fuel will for the first time, become threatened in the next two and a half years. Though the SSRC does not get involved with short term weather prediction, it would not be unusual to see these ill-effects this year much less within the next 30 months."

Casey's research work has been ground-breaking among the scientific community. Terrence Aym writes: "Casey's organization has been at the forefront of the climate change controversy, correctly predicting in advance three important changes in the climate that many others missed: the end of global warming cycle (1999), a long term drop in the Earth's temperatures (starting in 2006 to 2007) the unsettling prospect of an historic contraction of the Sun's energy resulting in a never-before-seen solar hibernation. The hibernation is now recognized by NASA's Long Range Solar Forecast through 2022 and as well as the stunning slowdown of sun's activity".

The practical results make even more alarming reading *. As an afterthought, why do two thousand red-winged blackbirds decide to fly at night (not a habit since they are not nocturnal birds) and suddenly plummet from the sky? Hail? No, there was no hailstorm over that part of Arkansas. Lightning? It might eventually strike one bird, not a flock. Fireworks? Ditto.

The more ridiculous and multiple the excuses, the more it smells of a cover-up, like the fish kill around the same time in the same State. What is going on? Has someone been testing weapons? Has someone been letting off poisons? Or are these the first victims of an icy chill?