A research article presented by an Israeli team has unearthed new evidence on the history of the human being - namely that Homo sapiens may be far, far older than we imagined. A research team from the University of Tel Aviv has discovered fossilised teeth 400,000 years old. 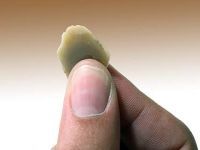 What the research team from the University of Tel Aviv has discovered sends the history book of Homo sapiens out of the window. Previously it was thought that our species has existed since between 250,000 and 200,000 years ago. The research article* makes an analysis of Middle Pleistocene permanent and deciduous teeth from the site of Qesem Cave (Israel). The abstract states "All of the human fossils are assigned to the Acheulo-Yabrudian Cultural Complex (AYCC) of the late Lower Paleolithic. The Middle Pleistocene age of the Qesem teeth (400-200 ka) places them chronologically earlier than the bulk of fossil hominin specimens previously known from southwest Asia".

The teeth in question date from 400,000 years ago and have managed to convince the team that they present more features of Homo sapiens than any other previous species, such as Neanderthal. They were found during excavation works in the Qesem cave, found in the year 2000 near the Israeli capital, Tel Aviv.

Team leader Avi Gopher considers that more research is needed before a firm declaration can be made, however, he considers that "The dating in the cave shows that the presence of Homo sapiens in this part of the world is older than other evidence we had until now. This conclusion may be of great importance, because it may be the first evidence to change some of the paradigms that we use in terms of human evolution".

The fossilised teeth were examined with X-rays and CAT-scans and the dating was calculated according to the underground layer they were found at. If the Tel Aviv University team are right, they have hit the jackpot in terms of the theory of human evolution, and prove that we know apparently next to nothing. How many more gaps are there in the chain? And did we really all descend from Lucy, making a mass migration out of Africa, or did we appear in different places at different times, like all other species?