Amazon no longer in Flames

Brazil is struggling to achieve its goals of zero deforestation. Learn why they are so important. 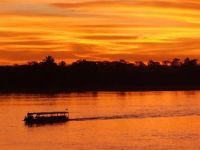 COP-16 this year brought an important piece of news, which made the Brazilian commission of the UN come out almost exultant from Cancun: deforestation in the Amazon was the lowest in 22 years. The reduction is 13.6% compared to 2009: 6,451 km ² is an area slightly larger than the Federal District.

Although the number is still alarmingly high, it represents a victory from previous years. In going from 2003 to 2004, the deforested area was four times greater, it had hovered around 27,423 km ².

To draw attention to this question in 2008, actor Harrison Ford had his chest waxed on camera while saying "Every bit of rainforest that is lost there ... it really hurts here."

But why is there such intense combat against deforestation? Because it's not just governments, but do national and international companies worry seriously about the number of trees in the Amazon region?

One of the reasons for this to be such a central issue for the present day is that it touches on global warming. It is from illegal deforestation that comes between 15 and 20% of CO ² in the world, and Brazil and Indonesia hold the two highest rates. Trees absorb carbon dioxide and the last great Amazon forest is still standing. But it is not just losing a large retainer of CO ²: burning, which is still the most widely used method to bring down large tracts of trees also releases very high levels of toxic gases into the atmosphere.

An interesting note ed.: A single mature tree can absorb carbon dioxide at a rate of 48 lbs./year and release enough oxygen back into the atmosphere to support 2 human beings.

Deforestation causes soil erosion. Plant roots anchor the soil and prevent its erosion in case of rain, for example-without them, the land is easily drawn, which explains the frequent landslides in cities. Changes in water regime are also significant because the trees retain water and release it into the atmosphere. Without this invisible cycle, courses of the water can be changed or interrupted.

Deforestation is also responsible for the disappearance of thousands of species every year, not only plants but also animals that have lost their habitat. It is likely that many species never come to be known by man; extinct before recorded.

The Earth is the only planet in our solar system, galaxy and the entire length of the known universe to produce life. When a species is extinct, there is no turning back: it's lost not only for us but for the entire universe. Life is a miracle that carries responsibilities. It is up to us to protect it. We cannot continue destroying the Amazon without worrying about the consequences, so terrible as to be durable.