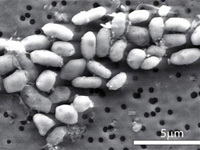 The newly discovered life form reported recently by NASA is not alien. It was discovered on our own earth and it is not made up of strange, mysterious chemicals. The building blocks of its DNA are only very slightly different from the building blocks of DNA found in all the other forms of life. But, like in all the other forms of life on earth, the building blocks have to be in a precise sequence for its cellular machinery to work. There is absolutely no evidence that the sequence (i.e. the code) of this life form ever evolved or came about by chance. That's wishful, blind evolutionary hope!

Life isn't something that can happen by chance processes, no matter how much time is hypothesized. Millions of high school and college biology textbooks imply that Stanley Miller, in the 1950's, showed that life could arise by chance. Nothing could be further from the truth.

Once there is a complete and living cell then the genetic code and other biological mechanisms exist to direct the formation of more cells. The question is how could life have arisen naturally when there was no energy-converting and directing mechanisms in nature.

Thanks to evolution's popular high priests and evangelist writers such as Richard Dawkins, many in society have come to believe that natural selection will solve all of evolution's problems.

Natural selection cannot produce anything. It can only "select" from what is produced. It is a passive process in nature. If some life form develops a feature that helps it survive we say it was "selected". That's natural selection. It's another term for "survival of the fittest". It's not a creative or organizing force. Furthermore, natural selection operates only once there is life and reproduction and not before so it cannot be used for explaining the origin of life.

Since chance processes do not produce genetic information, it is much more logical to believe that the genetic and biological similarities between various forms of life are because of a common Genetic Engineer or Designer (God) Who designed similar functions for similar purposes in all the various species and forms of life.

All that scientists have done is genetically engineer already existing forms of life in the laboratory, and by doing this scientists have been able to produce new forms of life, but they did not produce these new life forms from non-living matter. And, as mentioned, even if scientists ever do produce life from non-living matter it will only be through intelligent design or planning so it still wouldn't help support any theory of life originating by chance or evolution.

Science cannot prove that we are here by either chance or design, but the scientific evidence can be used to support one or the other.

But, when all the evidence is presented it should show beyond all reasonable doubt that life didn't originate by chance but by design.