The Giant Panda: The good news

Finally some good news on the environment, on ecology and on the Giant Panda: a revolutionary new technique developed by the PR China's Chengdu breeding center seems certain to assure that greater numbers of this endangered species can be raised in thereby save it from extinction. 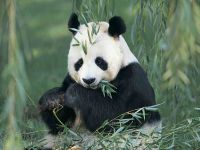 Just 1,600 Giant Pandas live in the wild, in 40 government-controlled panda reserves in the People's Republic of China. The new breeding program has raised the number of animals bred in captivity to 300, while just this year 19 cubs have been born after artificial insemination programs in China's two main breeding centers.

Breeding Giant Pandas in captivity is no easy task. They have the strangest gestation period which can range from eleven weeks to eleven months, they appear not to be sexually aroused by being held in captivity, females are on heat for 72 hours a year and are fertile during a 12 to 24-hour window inside that period. The small size of the male penis also means the mating position has to be exactly right, and this is not always possible in captivity.

The first Giant Panda successfully bred in captivity was in 1963 and since it was launched in 1987, Chengdu Panda Breeding research Center has raised 168 cubs. Over the years the scientists battled against the tremendous breeding difficulties mentioned above, coupled with the fact that mothers often left cubs to die. In half of pregnancies, twins are born and mothers were leaving the second to die.

Twin adoption scheme was the breakthrough

Scientists tried everything over the years, from trying to entice males to mate using female scent on a bamboo pole which they waved in front of them. The scent-marking rarely resulted in anything more than violence. They then showed the animals sex education videos and tried plying them with viagra, all to no avail. Artificial insemination was also hit-and-miss due to the strange reproductive cycle of the females. 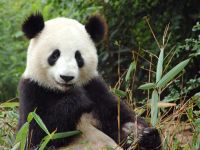 Finally, scientists at the center pioneered the twin swapping technique, in which pairs of cubs were alternated between the mother and an incubator, tricking the mothers into caring for two cubs at a time.

It is now considered that there are sufficient numbers being raised in captivity that wild reintroduction programs can be launched in the near future, probably within 15 years. Construction of the first such facility has begun and conservationists have bought up panda habitat areas in Sichuan province in the south-west of the PR China.