After reading through these pages, those who produce carbonated drinks are likely to be outraged, while those who consume them die slow deaths. Where does the truth lie? Read on. Medical research comes up against the drinks lobby. Fascinating, yet terrifying, reading. 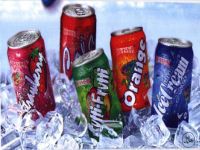 Gout...increased risk for women, specially, when they drink soft beverages rich in fructose...Osteoporosis, caused by the carbonic and phosphoric acid in the carbonated drinks.  How? CO2. Carbonation irritates the stomach, which reacts by finding calcium from the blood as an antacid and the blood turns to the bones to replenish its calcium.

Carbonated drinks are ultra-high in sugar...and when ingested in high quantities, it sends signals to the pancreas, which sends massive quantities of insulin into the system to prevent nerve damage, reducing in turn testosterone levels which affect the calcium levels in the bones.

Cancer? Carbonated beverages cause acid reflux, damaging tissues in vulnerable areas, such as the oesophagus. These lesions can become cancerous. Healthy systems need to be alkaline 7.365...but carbonated drinks register at 2.8. This is 100,000 times more acidic than water.