The International Tiger Conservation Forum held in St. Petersburg from November 21 to 24 has taken concrete steps towards insuring that the tiger comes back from the brink of extinction, doubling its population over the next 12 years and creating the conditions to eliminate dangers to these magnificent animals. 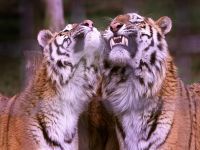 The Tiger Summit came after a year of consultations among representatives of the Tiger Range Countries (TRCs) on how to double the population of tigers by 2022, which will be the next WWF Year of the Tiger. Among the policies put forward by the Summit was an immediate 85 million-USD fund proposed by the WWF for the next five years, and a more ambitions 12-year programme with a financing of 350 million USD aiming at doubling the population of tigers living in the wild, currently estimated at 3,200.

This, when a century ago there were over 100,000 of these animals roaming across Siberia and other parts of Asia. Poaching for trophies or body parts to sell in restaurants, illegal trade in animals for private zoos and habitat loss have taken a terrible toll wiping out some 97% of these animals in just a hundred years.

Russian PM Vladimir Putin, hosting the Summit, set forth the concrete policies adopted by the meeting: "We plan to toughen laws against both killing tigers and the illegal trading in these animals," adding that as regards the Amur Tiger in Siberia, "key requirements will be taken into account when preparing programs to develop the Far Eastern territories."

Russia and the PR China are planning to set up cross-border areas where tigers can move freely and in safety, while Vladimir Putin suggested that Kazakhstan and the IR Iran, two countries where the tiger population has disappeared completely, should use Russia's tiger facilities: "Russian tiger families can start the revival of tiger populations in countries where they have vanished".

Speaking about the TRCs, the Russian PM stated "It is hard to solve the issues of preserving wildlife in these countries. We should support their governments in order to effectively solve environmental protection issues".

For Vladimir Putin, "Displaying care about wildlife, we eventually show care about man".