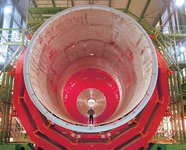 Large Hadron Collider is full of new surprises, not always pleasant ones. It was recently discovered that even the famous Nostradamus predicted the emergence in Europe of a "satanic arc of fury" threatening dire consequences across the globe. What is not quite clear is whether the prophecy has anything to do with the collider.

Michel Nostradamus, who lived in the 16th century, was not just a physician and astrologer, but also a person with extensive scientific knowledge. Until now, we do not know for certain what the sources of his information about the future were. He was said to have built a "mirror" machine in which he saw pictures of the future. Perhaps, it was a medieval time machine.

The modern interpreters of his works believe that the prophecies of Nostradamus for 2010 should be sought in quatrains X of X Centuries. There is also a mentioning of some "satanic arc if fury in Europe," which in November of 2010 may cause "terrible burning "of half of the globe. As a result, in 2011, deadly precipitation will occur and everything will be infected by it. There will be no plants, no animals, and by 2016 all people will perish.

Until recently it was believed that he could have been talking about a launch of a ballistic missile (Nostradamus, who was not familiar with the realities of the 21st century, could see a rocket trajectory as a "satanic arc"). In this case, radioactive precipitation makes sense. However, a significant event occurred on November 4th and 7th of this year: the collider testers recorded the first collisions of lead ions at a very high speed.

"The purpose of the experiments is to obtain a quark-gluon plasma," said Yuri Kharlov with the Institute of High Energy Physics, who now works at CERN. "A full disintegration of the matter into quarks, gluons, and bosons - this has never been observed before."

What can this kind of testing result in? After all, if the universe was formed as a result of the Big Bang, there may be a reverse process. If researchers can "accelerate" the particles, raising the energy level and temperature, and increasing the intensity of their collision, etc., then it is possible that Earth will turn into a giant proton-e-bomb whose explosion will shake the entire solar system.

Yet, even if an explosion of this intensity will not happen, then the processes started by the acceleration of particles will cause terrible environmental consequences for the planet. However, a softer version is possible as well, which was predicted by Nostradamus: the catastrophe will affect only half of the globe. Perhaps the ocean will be able to protect America and Australia, since water absorbs heat. Yet it all depends on the intensity of the destructive processes.

A former Soviet psychic Wolf Messing used to mention "a dangerous lab in the mountains of Europe." Unfortunately, the meaning of these prophecies remained unclear until recently. Meanwhile, some researchers are seriously talking about the fact that various natural disasters and abnormal weather patterns that became frequent lately may be "side effects" of the collider.

However, most scientists do not respond to all these fears, rightly believing that those who expressed them were simply bad students in school and did not learn their physics well. From their point of view, there is no potential danger, because to create a "black hole" you must have the strongest gravitational compression created by a huge mass of matter. The collider is simply incapable of this.

In general, experiments with the LHC are not something new to mankind. Particle accelerators have been extensively used in research laboratories since the mid twentieth century, and no one has yet seen any harm caused by them. Additionally, accidents and malfunctions in such devices are extremely rare, and nuclear power plants explode even more frequently.

Yet, none of the predecessors of the current Large Hadron Collider failed to achieve similar rates of particle acceleration. Nevertheless, these rates still cannot match the speed of light. But, as we recall, according to Einstein's formula (E = mc2), for the mass to turn into energy, meaning, for our planet to explode, its value must be doubled. At lower speeds nothing like this can happen.

The assumptions made about the fact that the collider could affect the planet's climate are generally ungrounded. What could this device do? Emit large amounts of heat into the atmosphere? But even if that happens (after all, the collider has a very reliable protection), this amount of heat energy is unlikely to be greater than that released during the eruption. As we know, they affect the climate only locally, i.e. only in those areas where they are located.

Nor should we fear that red-hot plasma will leak onto the territory of Europe. Even if that happens, its amount is so small that it is not enough even to burn the forest around the giant accelerator.

As for the prophecies of Nostradamus, as we know, all connections to specific dates are very, very doubtful. The dating of events in his prophecies is traced according to a slightly modified Hebrew calendar, which dates from the creation of the world (in this case Nostradamus, for some reason, pushed the date back another 1,000 years). There is no system in place that could accurately compare the dates of these two very different systems of chronology.

It very well may be that all the horrors predicted by Nostradamus have nothing to do with our time.
Most likely, the collider should not be afraid of. Yet, anything can happen and it may be a good decision to stop the experiment before it is too late.