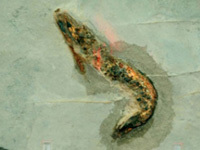 Researchers from Ohio University found a shrimp buried in a layer of limestone in Oklahoma. The fossil has been deemed to be the oldest shrimp ever discovered, stretching the purported evolutionary history of this tiny crustacean by about 125 million years.

A recent study of the fossil by Kent State University geologists, however, has uncovered clear features that not only refute an evolutionary context for this find, but also confirm the creation model.

First, the fossil was found in a layer far below the level of the one in Madagascar in which the previously known lowest shrimp fossils were discovered. Professor emeritus Rodney Feldmann said in a Kent State press release that this supposedly 350-million-year-old "shrimp from Oklahoma might, thus, be the oldest decapod on earth."1 Decapod means "10 legs" and is a classification of arthropods that includes shrimp and lobsters.

Since modern shrimp look just like the one discovered in Oklahoma (it was easily identifiable as a "shrimp"), critical thinkers are asked to believe that 350 million years' worth of mutations and natural selection has had zero effect on the shrimp body plan! A more likely interpretation is that it's not as old as the researchers claimed.

Similar circumstances surround many (perhaps most!) other living forms, including alligators, sharks, horseshoe crabs, ginkgo trees, dragonflies, and coelocanth fish. The fossils all show stability of discontinuous created forms, with no evolutionary continuity between them.

Secondly, the fossil--the study of which appears in the current issue of Journal of Crustacean Biology--contains muscle in the tail. Feldman explained, "The muscles...were preserved by a combination of acidic waters and a low oxygen content as the animal was buried rapidly."1

But this statement ignores the fact, verified by experiments, that acidic waters and low oxygen could not forestall decay for 50,000 years, let alone 350,000,000! One experiment found that when buried in mud with low oxygen, whole fish carcasses disintegrated within days.2 Perhaps this rapid decay is expedited by the transference of electrons from the deep mud up to the surface using bacterial nanowires.3

The still-pink shrimp fossil, like dozens of fossils with fresh tissue, looks like it was deposited much more recently than its evolutionary age assignment would allow.4 If it did not look so out-of-place, its muscles, "preserved completely enough that discrete muscle bands are discernable," would not have been described as "remarkably preserved" by the study's authors.5

Were those investigating this fossil willing to consider the biblical Flood of Noah as a causative agent of rapid burial and recent preservation, they would be much more satisfied with the good fit between this data and the Bible's historical model.