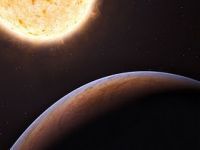 The first planet discovered one that originates outside the Milky Way should have been swallowed by the star, but remains in orbit

A newly discovered planet, that originates outside the Milky Way, orbiting a star with no heavy elements, and that should no longer exist, are challenging the knowledge of the formation of celestial bodies. It is currently orbiting around the star HIP 13044, but should have been destroyed when the star became a red giant.

In this process, the red giant multiplies many times its size and swallows everything that is around. "Probably lucky we found a survivor in the system," said Johny Setiawan, iG, from Max Planck Institute in Germany, and the lead author of the study published on Thursday in the Science journal.

Although the planet, called HIP 13044 b, is currently within the Milky Way, its origin is a galaxy that existed around it, but it broke down over billions of years. The planet has a minimum mass 1.25 times that of Jupiter and is part of the so-called Helmi stream - the group of stars that originally belonged to a dwarf galaxy that was devoured by our galaxy, the Milky Way, in an act of galactic cannibalism about six to nine billion years ago.

This makes it the first planet to be coming from another galaxy to have its existence confirmed after more than 15 years of research that has found over 500 planets orbiting stars within the Milky Way.

HIP 13044 b also has another peculiarity: it has been found around a star that has few heavy elements besides hydrogen and helium, such as iron. "In the most accepted model of formation of planets, that is unusual. It can be predicted that the higher the abundance of metals the higher the probability of forming a planet. This discovery is evidence that there are alternative mechanisms for planet formation that allow the formation of planets around very metal-poor stars," explained Setiawan.

One explanation for its survival is that the planet has a mass greater than that of Jupiter, and was in a safe orbit when the star passed through the red giant phase." There is evidence that other planets were closer to the star, but did not survive," Setiawan said.

Now the survivor, named HIP 13044 b, cannot be completely safe. The next stage of evolution of its star will lead to a new expansion, and it may have the same fate as its sister planets. This could also foretell the demise of our outer planets, such as Jupiter, when the Sun approaches the end of its life.