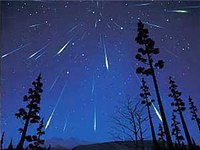 On the night of November 17 of this year, the annual maximum of the most powerful fall stargazing is expected. All the inhabitants of Earth will see in the night sky a meteor shower called the Leonids. For many years it has been brought to us by the comet Tempel-Tuttle. Everyone who sees this meteor shower will not only enjoy its beauty, but will also have a chance to make a wish.

Meteor shower Leonids is in the constellation of Leo, its radiant (the point where all the stars seem to "fall" from) is located between the stars of Gamma and Epsilon. The "convergence" of meteors into the radiant is, of course, illusory. This can be compared to a convergence of railway rails into one point on the horizon.

Muscovites will observe the maximum at 12:10am. According to astronomers, during the maximum, up to a hundred meteors per hour can be observed in the sky. This is not a record because earlier, in 1999-2002, up to three thousand of "falling stars" per hour could be observed (annually the number is 1to 2 meteors per hour). In addition, the observations in this case would interfere with the moon, which will be close to full. The moon, however, will set a few hours before the sunrise. Generally, this shower can be seen for approximately two weeks, from November 9 to 22.

The birth of Leonid is associated with comet 55R/Tempel-Tuttle of the Uranus family. This comet was discovered independently by Ernst Tempel on December 19, 1865, and Horace Tuttle on January 6, 1866. The diameter of the nucleus of the Comet Tempel-Tuttle is estimated at 4 km. Leonids are famous white fast meteors that reach the speed of 71 kilometers per second. It is due to the passage of the parent comet's perihelion in 1998 (that is, bringing it closer to the Sun) that the intensity of the "shower" has markedly increased. Now this period is over, but the interest in observation of the meteor shower, of course, has not disappeared.

Comet Tempel-Tuttle is moving closer to the Earth's orbit every 33.2 years. Precisely at these moments, meteor showers start pouring with the maximum intensity. The last time this phenomenon was observed in 1966, when every hour 150,000 meteors burnt in the Earth's atmosphere. It is expected that the next meteor shower of the same intensity will occur in 2099. This mainly has to do with the smallest particles of the size of a grain of sand thrown out by a comet at the time of eruption if de-icing gases from its surface.

Gases evaporate under the influence of solar heat, when the comet is close enough to the sun - closer than the orbit of Jupiter. Relatively large fireballs with the width up to a centimeter occur among small parts. When such a particle with the mass not exceeding hundreds of grams enters the atmosphere, it carries a kinetic energy comparable to a fast-moving car. Total annual "precipitation" brought by Leonid to Earth is estimated at 12-13 tons.

Leonids is the most studied and, perhaps, the most famous meteor shower. Leonids have played a decisive role in the development of research on meteors due to an unprecedented meteor "storm" of 1833 (its intensity, according to some estimates, exceeded two hundred thousand meteors per hour). Up until then the meteor showers were seen as a purely atmospheric phenomena.

Normally, optic tools are not required for observations of meteor showers as they can be seen even without binoculars. In addition, these purely amateur observations can bring substantial benefits to astronomy, helping to gather statistics on Earth overcoming clouds of cometary particles that cross Earth's orbit.

It is recommended to get comfortable while observing "falling stars" and sit or lie down in a place with good visibility. You can get a photocopy of the area of the sky where the meteors are expected to appear (in this case, remember we are talking about the constellation Leo). During the meteor shower remember and mark down its path and direction, using a ruler. Upon registration of meteors they should be applied to the star map with a brief description (number, time, magnitude, path length, speed, color, etc). Entries are provided with an indication of the origin point of observation and weather conditions.

Proverbial superstition that suggests making a wish when seeing a "shooting star" dates back to ancient times. Starry sky then was perceived as a receptacle of gods and spirits, and the stars were believed to have connections with human souls. According to some legends, a shooting star is the soul flying from the sky to move into a newborn baby, according to others it is, on the contrary, a soul of a person who left her mortal body and is ascending to heaven. If the heavens themselves give us such signs, we have to use it and ask for something (astronomers in this case should be the happiest people on Earth).

The next spectacle of this kind (though not so impressive) is expected in December. On the night of December 13 (at 2:00am) a maximum of the Geminids meteor shower is expected. Radiant of this shower lies in the constellation of Gemini near Castor, but its origin is presumably associated with the asteroid 3200 Phaethon (1983 TB). The Geminids do not fly towards Earth like the Leonids, but catch up with it, because the rate of meteors in this flow is low (approximately 35 kilometers per second).