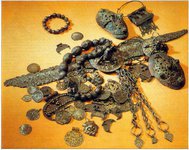 Russian archeologists made an excavation on the territory of the Holy Land, in the Biblical town of Jericho, during the last field season for the first time since the 19th century. The scientists have managed to find out Byzantium structures and unique multicolor mosaics. Archeologists think that it can be the remnants of a Christian monastery of VI-VII centuries.

The expedition is unique because it is the first excavation of home archeologists in the Holy Land in the current millennium. Previous excavations of antiquarians in the Holy Land were made in Jericho at the end of the 1880s. However, their results have not been published yet and unknown for the general public.

Everybody who is interested in the history of the Middle East was informed about the results of the work of the expedition thanks to heavy coverage in the media. The results were unique in a way: Russian scientists have managed to confirm the existence of a large Christian community on the territory of the town in VI-VII centuries AD. And this community was quite prosperous, from all appearances.

"The main finding is a colorful mosaics of VI-VII centuries. It is made of little colorful stones. Some 150 thousand little stones of 7-8 colors have been used to create it. Complicated geometry, herbal and Christian imagery, in particular, vases, with grape-vines is a popular liturgical symbol", Leonid Belyaev, Doctor of Science (History), head of Sector of Moscow Archeology of the Institute of Archeology said at the archeological season closing ceremony.

Besides, some 200 coins, mainly Byzantine ones, have been found, fragments of living and service spaces, temples were opened. "Thus, you can say that our archeologists, most probably, have found the remnants of a monastery with multicolor mosaics", Nikolay Makarov, Director of the Institute of Archeology supposed.

Why is Jericho so attractive for archeologists? Actually, it is a most enigmatic Middle East settlement. A town has been built at this place many times. It grew, broadened and suddenly fell into disrepair and disappeared actually. At that, people settled on this «strange place» for the first time some ten thousand years ago! Thus, Jericho remains the most ancient known center of appearance of the civilization.

Excavation of the layers of the late Neolithic age have showed that in the process of transition of people from hunting and gathering to irrigate agriculture in the Middle East a real town civilization has appeared. The remnants of stone Jerichonian valiums and houses made of unfired brick are signs of it. Thus, the Jericho of the Pre-Pottery Neolithic (some nine thousand years ago) and the most ancient known town of the world.

In the fifth century BC new settlers appeared in Jericho. It is known about them only that they had the culture of shaped maison jars. These mystery emigrants have turn Jericho into a prosperous town to the third millennium BC and walled it around. However, afterwards it was almost broken to smashed a few times.

It was destroyed for the first time near 2000 BC by nomads of unknown origin who invaded in Canaan. But it was rebuilt soon and enclosed by defence constructions typical for the period of Hyksos (a Lybian tribe of cattle-breeders whose chiefs ruled Egypt for a long time). The destroyed Jericho has been restored again and turned out to be the first fortified point on the way of Israeli tribes which intruded into Canaan.

But scientists cannot so far find out traces of the famous military campaign of Jesus Navin against Jericho when the walls of the town were destroyed by sounds of trumpets and almost all the population was massacred. Judging by the archeologists' information this town became empty and turned into ruins much earlier than the above-said campaign was held but it is unknown why. Probably the town died in the XIII century due to an earthquake.

The town expanded once again in VII-VI centuries BC and remained unfortified. Maybe by this reason it was unlucky again in 587 BC when it was destroyed by Babylonians. But after return of former Babylon prisoners it was restored again, broadened and begin to figure in the Persian province of Jehud and after that in the restored Judaea of the period of the Second Temple when it was the second city of the country after Jerusalem.

In the course of the First Jewish War (66-70 AD) Jericho was destroyed by Roman commander Vespasian (68 AD). But at the end of the first century Roman built a town like a military camp two kilometers to the west from the ruins which was invaded by Jewish rebels and left by them very soon. After that there were no big settlements here, probably.

The next blossom of Jericho occurred in the Byzantine epoch. But then the town shifted a kilometer and a half eastwards from the former ruins to its current place. To all appearances, it was a many-colored megapolis with multinational population where Jews and Christians of different confessions lived together peacefully. The artifacts found by the Russian archeologists this year date from this time.

Some time later the town was invaded by Arabs who did not destroy it. Moreover, new conquerors liked it so much that in 724 kalif Hisham began construction of a huge (in area of two ha) winter palace with a wonderful modeling and mosaic floors. Unfortunately, the confession was broken by an earthquake and has not been renewed.

The end of the ancient Jericho came in the epoch of Crusades. In 1099 the town was invaded by crusaders but in 1187 Egyptian commander Salah Ad Din took it without striking a blow.

In the early 19th century the ruins revived once again. In this plentiful oasis a few Bedu clans settled and at the end of XIX century Nubian Arabs, Muslims, natives of Sudan did the same. In the late XIX century the town began to broaden and was populated by some three thousand inhabitants. Later it changed hands and was now Jordanian then Israeli. Currently, according to the Norwegian agreements Jericho is in the structure of the Palestinian Autonomy.

So the history of the most ancient town of the world was very stormy and enigmatic. It is unclear so far why Jericho ceased to exist and revived again later. Let us hope that the further research of Russian archeologists will help to solve the enigmas of this wonderful settlement.