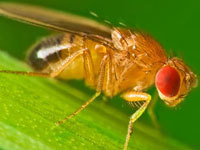 July 22, 2010, marked the 100th anniversary of genetic investigations using fruit flies. The first such study appeared in Science in 1910 and described the unexpected appearance of a male fruit fly with white eyes after generations of flies with pigmented eyes. This began a century of focused studies on fruit fly mutations, but what has really been learned by all this tinkering?

For most of the past century--and especially since the discovery of DNA as a physical molecule carrying heritable information--the prevailing concept of neo-Darwinian evolution has held mutations to be the central generator of new and useful information. Thus, mutations have been given ample opportunity to prove themselves, if they are naturally selected, as having "the power to drive the evolution of all living things in the direction of positive improvement."

Fruit flies, with their short generation times and only four pairs of chromosomes, presented prime testing ground for evolution. In laboratories worldwide, they have been subjected to all manner of mutation-inducing phenomena, including hosts of chemicals and radiation treatments, to try and accelerate evolution-mimicking mutations. After all this, fruit flies should have certainly exemplified evolution by now. But they haven't.

So, having achieved no evolutionary progression in fruit flies by these random means, researchers made them the focus of countless purposeful gene manipulation studies. The most popular, from an evolutionary perspective, were experiments with what are called HOX genes.

HOX, an abbreviation of "homeobox," are genes used by the organism during embryonic development. Many reasoned that it would be simpler for evolution to operate by mutating these genes, since a small alteration could produce a large effect in the fly's body. However, this was before recent studies showed that embyronic development is more heavily influenced by regulatory DNA, not genes. And mutating (through substituting, deleting, or duplicating) developmental genes like HOX has only ever yielded a dead fly, a normal fly (if the mutation happened to have no noticeable effect), or a tiny monster. None of these results match the "positive improvement" expected of Darwinian evolution.

Extra body segments, an extra set of wings, or legs in the place of antennae characterized the weird forms that were generated. Three generations of specifically designed DNA alterations were required to produce fruit flies with four wings--but they couldn't fly. The extra wings had no muscles and were dead weight. One recent exploration of neo-Darwinism remarked:

The mutants that produce four-winged fruit flies survive today only in a carefully controlled environment and only when skilled researchers meticulously guide their subjects through one non-functional stage after another. This carefully controlled experiment does not tell us much about what undirected mutations can produce in the wild.

In his book Evolution, Colin Patterson summarized the lost hope of finding evolution from HOX investigations:

The spectacular effects of homeobox gene mutations were first seen in Drosophila, early in the history of genetics. Carriers of some of these mutations certainly qualify as monsters--though without much hope.

Whereas fruit fly studies have provided critical information about how genes, nerves, longevity, and other biological machines and processes operate, no progress whatsoever has been made in the quest to accelerate these insects' "evolution" by ramping up their mutations. The survivors of 100 years of lab torture are still just fruit flies.