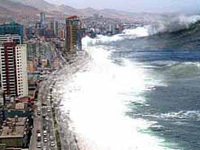 Scientists continue to scare the world population with imminent disasters. This time, the role of the force of nature that will destroy the planet was given to the Global Flood. Spanish hydrologists believe that it can occur in the beginning of this century due to the melting of the glaciers. Will their predictions come true?

Modeling of changes in the Atlantic currents that took place in the past allowed the international team of scientists to calculate the speed at which the level of the World Ocean is rising. Hydrologists believe that in this century the water can claim the territory of the largest sea powers. Traditionally, scientists blame this on the notorious global warming, whose existence has not been proved.

The researchers from Seville University believe that as the global warming progresses, the underwater currents in the Atlantic and Arctic Oceans grow stronger. Yet, they cannot answer the question why this happens (logically, the effect should be the opposite because warming reduces the difference between the temperature of water at the equator and the poles that creates global oceanic currents similar to the Gulf Stream).

Hydrologists think that additional redistribution of water that occurs due to these phenomena speeds up the approaching of the ocean. This statement seems doubtful because it violates the law of mass preservation, because stronger currents cannot create additional volume of water out of nothing. Yet, according to the forecast of the Spanish specialists, this will happen in the middle of the 21 century. As a result, the larger part of Island, nearly entire Scotland and many northern islands will be covered with water. Denmark and Netherlands are also threatened with floods.

But back to our climate-related horror story invented by the Spanish hydrologists. The cooling of the Gulf Stream will destroy the temperature balance in the north. The world population will not be able to live on the remaining territories of Great Britain, Ireland and partially Canada. The melting of the southern glaciers threatens nearly all the rest of island countries in the Pacific and Indian oceans, as well as Australia and South America.

What is the conclusion of the story? It looks like there will be simultaneous global warming and new ice age. However, this idea is so absurd that even school kids are not scared by it. Yet, the researchers might have meant something else.

It looks like they suggested the following scheme of the catastrophe. First, global warming will cause mass melting of the glaciers, which will result in a temporary rise of the level of the world ocean and some inhibited territories will be flooded. Significant masses of cold water that formed as a result of glaciers melting will cause the Gulf Stream to stop, and the climate in the Northern hemisphere will get colder. It will stop the glaciers melting and a part of water that caused the Global Flood will freeze again.

The level of the world ocean will drop again, the flooded lands will be out of the water, but will be so cold that life on them will be impossible. This theory looks most logical since in this interpretation it, at the very least, does not contradict itself.

But how realistic is it? Mostly likely, not at all, and here is why. Even if we imagine that all ice of Arctic and Antarctic melt for a short period of time, not all the water will get to the ocean. The rise of average temperature on the planet will cause the water to evaporate faster. As a result, rain clouds will form which do not always pour their water on the ocean. A large part of rains will get to the land.

These rains may "soak" the territories of huge deserts like Sahara, Gobi, Kara Kum and Kyzyl Kum. The freed-up water will form new rivers and lakes on their territories. Of course, it will eventually make its way to the ocean, but this process will be lengthy and will not cause an immediate change in the level of the ocean.

Additionally, enhanced snow precipitation on the poles will cause formation of new ice. The summer on the poles is short and not very hot, so all the snow that falls in the winter will not melt. It will be accumulating and will eventually turn into ice.

This means that our planet is capable of regulating the level of the ocean on its own. Possibly, the process described above will take hundreds of thousands or even millions of years, and during these regulations transgression may occur, however, it is hardly likely that it will be catastrophic. It should be remembered that any transgression causes flooding of some territories and "rising" of other ones from the water (the law of preservation still works here).

As for the "stop" of the Gulf Stream, according to the studies of Russian paleoscientists conducted back in the 20th century, it was to cause global warming, not global cooling of the area near the poles. What are the sources of the "raw material" for the polar ice? They are snow precipitation brought by this warm current. If the Gulf Stream does not supply snow to the north, then the ice will not be able to recreate and will eventually melt.

The situation with the South Pole and Antarctic is even more interesting. The masses of water that formed due to the melting of the glaciers cannot depart from the continent because they will not be stopped by cold currents "covering" the ice continent. Accumulation of cold water around Antarctic will cause a local drop of temperature and formation of new masses of ice. This means that Australians, New Zealanders and residents of Oceania do not have reasons to worry.

As you can see, the prediction of Spanish hydrologists will hardly come true. Most likely, the scientists understand it themselves. Perhaps, the model was meant to scare the taxpayers and pump out more money for research.

Unfortunately, this method to get new grants is becoming increasingly more popular because people are ready to pay to avoid catastrophic events. If the catastrophe does not happen (which is most likely), the researchers will not have to account for the money they have spent.

These apocalyptic events are so tiring that there is a great temptation to adopt the method of an ancient Chinese Emperor who would generously pay for predictions, but if they would not come true, would have the "fortune tellers" and their families executed.