G-20: The need for green growth

As the G-20 get ready for their Summit in the Republic of Korea, their leaders need to go a lot further than taking merely economic measures; if in Seoul the G-20 leaders take cosmetic measures catering for the short-term interests of the financial sector, they may very well be jeopardising the long-term interests of humanity. 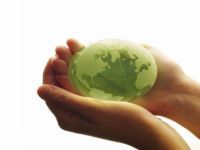 The United Nations Environment Programme is calling on the G-20 nations to make pledges towards delivering concrete actions which guarantee green and sustainable development, reminding the leaders that the loss of habitats is going to cost the planet not billions, but trillions of dollars.

Achim Steiner, UNEP Director, published an article in the Republic of Korea's daily newspaper JoongAng Daily, pointing out that in 2009, in London, G-20 leaders referred to building an "inclusive, sustainable and green recovery" and claimed that "In Seoul, this vision needs to be evolved toward not only a green recovery but to inclusive, sustainable green growth underpinned by clean technologies and the economic importance of maintaining nature's multi-trillion dollar services".

For Achim Steiner, the way forward is for the G-20 leaders to take measures which combine short-term and long-term strategies, following a vision which takes into account the interests of "the many and not just the few" through public sector and private policy investments. Pointing out that the current economic models contain inherent contradictions, the UNEP Director stated that reiterating current policies and implementing cosmetic measures will not be enough.

What needs to be done, he claims, is for the G-20 leaders to focus on financial sustainability, sustainable employment programs and the need to address poverty in the 21st century, indicating that business is looking to the leaders to provide responses which are more forward-looking and more imaginative.

Achim Steiner that "an increasing number of banks and pension funds see rising risks to their investments from the loss of ecosystems, such as forests, wetlands and the multi-trillion dollar services they produce" and that "a rising number now see the disruption to food supplies, supply chains and other challenges linked with natural resource losses and a bigger threat than that from international terrorism".

Positive moves he referred to were the government of the Republic of Korea's own policy, where an economic stimulus package ascribes around 90 per cent of its funds to a short- and long-term policy of green growth in which the leadership role of public policy-making has catered for the creation of schemes to release cash from the private sector for investment into green policies and clean energy, while special praise was given to the recent protocol arising from the Convention on Biological Diversity in Nagoya, Japan, under which new rules were set for improving access to and sharing the world's genetic resources.

This article is backed by the findings of the 31st annual meeting of the US Society of Environmental Toxicology and Chemistry on November 8 in Portland, Oregon, at which environmental chemists pointed out that melting ice will mean an increase in the concentration of toxic chemicals in the environment.

It was revealed that melting sea ice exposes more seawater to the atmosphere and this would make it easier for toxic chemicals in arctic waters to escape into the atmosphere.

Apart from this, residues of pesticides, heavy metals and household chemicals, with levels increased due to global warming, will pose greater threats to fish, animals and humans, while climate change will affect the movement and distribution of water. Added to this, an upswing in the lethal levels of heavy metals as their concentrations increase with rising temperatures is due over time to pose a direct threat to many of the planet's species.

Other data coming out of the meeting were the harmful effect of ultraviolet light on river beds due to lesser quantities of snow on mountain ridges, the increasing volatility of toxic chemicals caused by global warming, facilitating their dispersal in the wind and studies on micro-organisms revealed increasing sensitivity to toxic elements as temperatures rose.