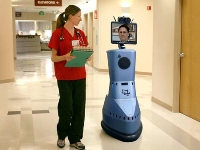 Robotic surgery will start to develop in Russia not earlier than in 2012, when robotic surgeons become available to just a few Russian medical institutions. In the meantime, Canadian medical specialists used machines in the first-ever all-robotic surgery at the end of October. It became the first operation where no part of the surgery was performed directly by humans.

Investments in robotic technology are on a record high level nowadays. Robots are used in car assembly and in microsurgery; they clean sewage systems and neutralize bombs.

Medicine is one of the most perspective directions of robotic technology nowadays. The USA's renowned da Vinci Surgical System performs minimally invasive surgery while a human surgeon controls every aspect of the procedure. The use of the system considerably decreases the risk of infection and increases the accuracy of action, which is extremely important during physical interference with the human body.

These systems are used in urology first and foremost. This field of medicine has achieved considerable progress in the use of robotic technology.

"The market value of a da Vinci robot is $2.5 million. The price in Russia is higher, of course. The technical servicing for the system is evaluated at 150-200 thousand euros a year. A set of its robotic arms can be used not more than ten times. One such set costs 10,000 euros," Yury Tolkach, a Russian urologist said.

For the time being, there are only six da Vinci robots in Russia today. In 2012, company Intuitive Surgical will lose its monopoly right for the production of such systems, and they will become more available to medics, the specialist believes. However, there are hardly any chances for the system to be made in Russia - the Russian robotic technology in this field lags far behind foreign competitors.

Russian surgeons are known as wizards for their hands, but the current development of the robotic technology in the world may deprive them of their reputation in a blink of an eye.

Da Vinci robot can already boast of many accomplishments. In Italy's Pisa, the robot, which allows human surgeons to work from remote locations, transplanted a pancreatic gland to the woman who had been suffering from diabetes type 1 for many years. The operation went very well, without any complications, and the woman recovered from her tormenting illness.

Modern technology promises another breakthrough in the field of cardiovascular robotic surgery. Most likely, modern medicine will soon refuse from opening the thorax during cardiac surgery. Robotic hands will be able to reach the organ through small apertures made in the chest of a patient. A human surgeon will have a 3D picture of the pulsating heart: the picture will be absolutely identical to what a surgeon sees during open heart surgery.

Italian scientists offer patients to swallow several parts of one robot one after another (ARES project). The self-assembling robot will assemble into one single module in patient's stomach, and a human surgeon will control the entire surgery from outside the body, which should make surgeries far less invasive, safer and more efficient.