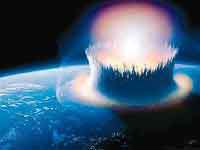 The probability for asteroid Apophis to collide with planet Earth is extremely small. If it happens, though, the asteroid will destroy a territory the size of which is similar to a European country. The power produced as a result of the impact will be comparable to the detonation of all nuclear arms that mankind currently has.

Boris Shustov, the director of the Astronomy Institute of the Russian Academy of Sciences, told Interfax that the collision with such a large celestial body as Apophis would have a global effect.

"A celestial body one or two kilometers in length would lead to global consequences, if it rammed into Earth. It does not matter where it lands - in the ocean or on the ground - the consequences will be global. Apophis' length is 350 meters, and the consequences of its collision with the planet would trigger a regional disaster. The impact zone of such an asteroid would be comparable to the territory of a medium-sized European country," Shustov said at Roskosmos press conference.

If Apophis strikes Earth, the income will not trigger a "nuclear winter" or other global consequences. The consequences will be limited to one region only.

"We can not say now where exactly the asteroid may strike the planet. We can only speak about a possible area of the impact," Shustov said.

99942 Apophis is a near-Earth asteroid that caused a brief period of concern in December 2004 because initial observations indicated a small probability (up to 2.7%) that it would strike the Earth in 2029. Additional observations provided improved predictions that eliminated the possibility of an impact on Earth or the Moon in 2029. However, a possibility remained that during the 2029 close encounter with Earth, Apophis would pass through a gravitational keyhole, a precise region in space no more than about 600 meters across, that would set up a future impact on April 13, 2036. This possibility kept the asteroid at Level 1 on the Torino impact hazard scale until August 2006, when the probability that Apophis will pass through the keyhole was determined to be very small. Apophis broke the record for the highest level on the Torino Scale, being, for only a short time, a level 4, before it was lowered. Its diameter is approximately 270 meters (885 ft).