The Japanese Giant Hornet is one of the most dangerous insects in the world. Two stings is enough to kill most people and shoots flesh-melting acid at the face of its victims - usually at the eyes. This five-ayes monster is endemic in the rural areas of Japan. 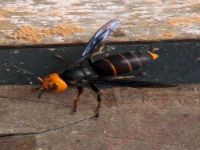 In his article "Japanese Giant Hornets: World's most dangerous insect?" US based researcher Terrence Aym* claims that the Japanese giant hornet, or Vespa mandarinia japonica, a subspecies of the Asian giant hornet, is "one of the most aggressive insects in the world", which "can shoot flesh-melting acid at you" and "it aims for the eyes", while "only a couple of stings is enough to kill most people".

The Japanese Giant Hornet, according to the researcher, has a wingspan of over 6 centimetres and is over 4 centimetres long. Three eyes on the top of its head sit between two large compound eyes. The insect has a dark brown thorax, a yellow head and a brown and yellow striped abdomen. The Japanese call it "Suzumebachi", or Giant Sparrow Bee.

What comes next in the article is terrifying. "Imagine that this bug is a relentless killer, single-minded in destroying whatever enemy might threaten it - including you, if it perceives you as a threat". However, "you don't have to imagine it. It's real".

The advice the author gives, is "run" and "seek the nearest shelter as fast as you can", indicating that there are stories of just 30 hornets destroying hives of 30,000 bees - one thousand bees each. Not that this would do you much good - the hornet can fly at 25 mph! When it attacks, it releases a chemical (an airborne pheromone) which sends a message back to base, rallying the hornet's nest. "Only a few stings will result in almost certain death," according to the article.

This horrific killer has a veritable arsenal of weapons. The highly venomous sting is only one. The other is a stream of flesh-melting acid which it squirts into the eyes of the victims. Blinded, they can do nothing to defend themselves against the enraged swarm.

This insect is responsible for dozens of deaths every year in Japan, along with hundreds of hospitalised cases. The Japanese are now marketing an energizing drink called Vaam, which apparently contains a synthetic formula of the Japanese Giant Hornet's strength and stamina.

And now for the bad news: people are starting to keep these monsters as pets in the USA. Just imagine if a pregnant Queen escapes and establishes a colony, making the Japanese Giant Hornet endemic in the United States of America.

"If that happened," claims Terrence Aym, "it would be the insect version of Pearl Harbor".