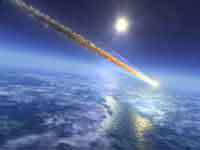 102 years after the fall of the famous celestial body in Tunguska taiga, scientists finally managed to identify the crash site of one of its fragments and examine the unusual composition of the substance of this space creature. The study was conducted using a unique instrument - GPR. As a result, it was proved that it was not a meteorite, but a comet.

The mystery of the Tunguska meteorite has long attracted the attention of researchers from around the world. Perhaps no visitor from outer space in the history of the mankind created so much noise, both literally and figuratively. The most surprising is the fact that in some hundred-odd years that have passed since that event, scientists have failed to solve this puzzle.

What happened in the Podkamennaya Tunguska River back in 1908? The witnesses say that on June 30 at about 7am something resembling a giant ball flew over the territory of Central Siberia in the north-western direction.

Its flight was accompanied by sound and light effects, and ended with a powerful explosion followed by a felling of forest between the rivers Kimchu and Hushmo - tributaries of the Podkamennaya Tunguska.

The explosion occurred at 7:14am local time. It was accompanied by a powerful earthquake which was registered by most seismological stations of the world, and air waves. It was noted that the echo of the explosion at Tunguska was heard over 800 kilometers away from the epicenter, the blast felled 2100 km ² of forest, and within a radius of 200 km windows of some houses were broken. Soon after, a magnetic storm began which lasted 5 hours.

Here's how this event is described by a witness, local resident Semyon Semenov:

"I was swinging my ax when the sky in the north has divided into two parts and a fire appeared in it above the forest, which covered the entire northern part of the sky. At that moment I felt so hot, as if my shirt was on fire. I wanted to tear and throw off my shirt, but the sky slammed shut and there was a strong blow. I was dropped off the porch and blown away.

After the strike came a tapping, as if rocks were falling from the sky or guns fired, the ground trembled, and when I lay on the ground, I feared that the rocks would break my head. At a time when the sky opened up, a hot wind swept from the north, like from a cannon, which has left traces on the ground in the form of tracks. Then it turned out that many of the windows shattered, and the iron tab for door lock in the barn was broken."

Somewhat later in the night on June 30, an intense glow of the sky, night shining clouds, and unusually colorful dusk were observed in dozens of settlements in Western Europe and Russia. By spectral observations made in Germany and England, this glow was not a part of the aurora, and was of some different nature.

In studying this phenomenon, French astronomers first suggested that on June 30 Earth clashed with a cloud of cosmic dust. Later this hypothesis was supported by several other prominent scientists, in particular B. I. Vernadsky. However, he thought that perhaps it was not a simple cloud of dust but a frozen cloud, that is, a fragment of the comet's nucleus. However, most astronomers thought that the Tunguska event was the result of falling of a giant meteorite on Earth.

The first expedition to the site of the disaster was sent only in 1921, but its members failed to get there. Only in 1927 a research team led by Leonid A. Kulik was able to reach the epicenter of the explosion.

The most interesting thing is that they have not found a crater left by a meteorite impact on Earth. Another oddity of the Tunguska event was that the forest was knocked over a large area close to the presumed site of a meteorite, but at the very epicenter of the explosion it remained standing. It seemed that the "alien" exploded in the air and did not reach the planet's surface.

Over the subsequent years, researchers have not managed to find a meteorite crater or fragments of the celestial body itself. Many scholars have asked a logical question whether it was a meteorite.

There were hypotheses that the explosion was not made by a celestial body, but by Earth's marsh gas that escaped from within (though the traces of its presence in this place were also not found), or that the cause of the accident was secret experiments of Nikola Tesla with electricity. However, all these theories also have not been confirmed.

The first steps toward unraveling the mystery of Tunguska were made in 2007 by a group of Italian researchers. Their expedition conducted geological surveys of the bottom and banks of Lake Cheko, located a few miles from the center of the explosion, and determined that this pool was a conical hopper with a fairly great depth of 50 meters.

All this suggests that a piece of the Tunguska meteorite fell there. Other candidates for the role of "craters" were nearby swamps Bublik, Suslov and Cranberry funnels.

In 2010, an expedition of Vladimir Alexeev with Troitsk Innovation and Nuclear Research Institute (TRINITY) set off to the area of the fall of the meteorite. Scientists brought ground penetrating radar - a unique instrument capable of lighting the ground to the depth of 100 meters. As a result, the examination of Suslov crater found that the crater resulted from a severe impact of a celestial body on the surface of the Earth.

The bottom of this funnel was structured as follows: the top layers were modern permafrost, below were damaged layers, and finally, deeper, the fragments of the cosmic body were discovered. Preliminary analysis showed that it was a huge piece of ice that apparently broke away from the comet's nucleus.

The famous "tailed stars" consist of very unusual ice formed with water frozen by space, methane and other gases with a mixture of solid particles. The kernel that weighs hundreds of billions of tons is followed by multi-kilometers tail, consisting of rarefied gases formed by evaporation of the ice by the sun.

It turns out that when approaching Earth, icy nucleus of comet shattered into fragments, which were scattered by the explosion several kilometers away. Having fallen on the surface of our planet, they formed several craters, which include Suslov funnel examined by the group of Alekseev. The tail of a comet that broke off scattered through the atmosphere, causing a very strange glow of the sky, which was observed on the night after falling of the celestial body.

Also, scientists were able to study traces of the matter of non-terrestrial origin detained in the resin of trees in the epicenter of the explosion (they still grow there). The researchers concluded that the substance was very similar to cosmic dust which is a part of the comet nucleus. This once again convinced them that the Tunguska "stranger" should be called not a meteorite, but a comet.

Thus, the theory suggested many years ago by Academician V. I. Vernadsky about a comet nature of the Tunguska meteorite has now received actual confirmation. It is interesting that it took scientists nearly a hundred years to solve this mystery. But as they say, better late than never.