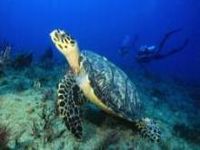 With the cooperation of coastal communities, Venezuela protects the five species of sea turtles that nest on the beaches of its Caribbean coast.

The Director of Diversity, Jesús Manzanilla, told Prensa Latina that the Ministry for the Environment has experience with the settlers and conducts programs to monitor and preserve the turtle nests in the dunes, their temporary dwelling places.

The projects provide for the care of the eggs to keep them safe from the actions of predators. Weeks after hatching, the newborns are released into the sea.

Other places of importance for the conservation of these creatures is the island of birds, considered the area of greatest importance to the reproduction of the green turtle in Venezuela, and the second worldwide, needed Manzanilla pointed out.

Studies show that between 350 and 600 species lay their eggs on the islet of about four hectares, mainly in the months from July to September.

Afterwards they travel to feeding grounds in other countries like Mexico, Cuba, Puerto Rico, the Dominican Republic and Nicaragua.

Sea turtles, now endangered, inhabited the oceans 200 million years ago. Shell-shaped hydrofoil fins facilitate their movement. Five of the seven species that survive on the planet spawn in Venezuela.

Enhancing efforts towards environmental education is another strategy to protect these reptiles, revered by ancient cultures that termed them as fish with shields.

Among the most notable species that reach the Venezuelan coast are Chelonia mydas (green), and caguama Cardón, the largest in the world that can exceed two meters in length and 500 kilograms of importance.