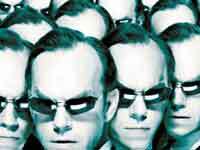 According to leading Russian geneticists, at the present level of development of biomedical technologies, we can produce a human from a single cell. Another question is whether this method of propagation is acceptable from the moral and religious point of view - a cloned person would have no parents. And could an artificial creature be free?

The question of whether human asexual reproduction at the present stage of scientific development was possible was responded in the affirmative by Alexander Sobolev at the 8th Conference "Science. Philosophy. Religion." Sobolev is head of the Laboratory of Molecular Genetics of Intracellular Transport of the Institute of Gene Biology, RAS, Professor of the Department of Biophysics of the Biological Faculty of Moscow State University, Doctor of Biological Sciences." The Conference was held at the Joint Institute for Nuclear Research of Dubna, and organized with the support of the Fund of Holy Apostle St. Andrew the First Called.

According to the scientist, "the issue of human cloning is ethical rather than biological, and is unlikely to be the subject of discussion in the coming years."

In turn, Father Dimitry (Pershin), Lecturer of the State Medical University, told reporters about the attitude of the Orthodox Church to human cloning:

"The analysis of such issues and development of solutions occurs with the participation of the Church and Community Council on Biomedical Ethics, which includes doctors, priests, scholars, theologians, philosophers and lawyers. In 2000, the Jubilee Bishops' Council adopted the "Basic Social Concept of the Russian Orthodox Church," a separate section of which is devoted to biomedical ethics, and includes human cloning. The Church has consistently supported the protection of human rights at all stages of its development, including embryonic, and therefore cannot support the idea of therapeutic cloning, since it involves the creation of human embryos for subsequent destruction. It is unacceptable to treat human life like raw material.

"It is very important for me that Russia's position on this issue coincides with the position reflected in the fundamental international documents that govern the world community. For example, the "Universal Declaration on Human Genome and Human Rights," adopted by UNESCO on 11 November 1997, says that the practice of reproductive cloning of human beings is not allowed because it is contrary to human dignity. And in the Declaration on Human Cloning of March 8, 2005, UN appeals directly to the Member States with an appeal "to prohibit all forms of human cloning as they are incompatible with human dignity and protection of human life." The basis of these documents incorporated rules formulated in the Nuremberg Code, adopted in 1947on the results of investigations of crimes of the Nazi doctors, as well as the Helsinki Declaration, adopted in 1964 by the World Medical Assembly.

"I believe that moral standards do not become obsolete with the development of biomedical technologies. I am convinced that the ancient Hippocratic covenant "do no harm" is still relevant, and the father of European medicine spread it to human embryos as well. In the language of the Bible, this commandment is known to all: "Thou shalt not kill." I hope that the moral responsibility will prevail, and an absolute ban on human cloning would be extended. It is necessary for all of us that we remain human beings.

"First of all, cloning is an experiment. And experiments in which subjects are human beings are not acceptable without their free and voluntary consent. In the case of cloning of human beings it is impossible to seek consent, because the one to give this consent appears as the result of the experiment. Thus, the fundamental human right not to be held hostage to someone else's manipulation of life and health is initially violated.

"This alone is a sufficient argument against human cloning, but there are purely medical arguments that reinforce this position. The fact is that as far as I know, so far we managed to clone a fairly large number of animals - cat, pig, cow, mule, mice. However, as noted by scholars, cloned animals are often abnormal, and have various forms of disability. The first cloned animal - Dolly the sheep - was put to sleep in 2003 at the age of exactly six and a half years, although many sheep live over 10 years. It developed a progressive lung disease, which usually affects older sheep, and premature arthritis. Some experts on cloning hypothesized that cloned people may need hip replacement as early as adolescence, and they may age as early as at 20. I am not even talking about the low efficiency of the method (less than 10%). I think that the creator of Dolly Sir Wilmouth had every reason to say when he addressed the U.S. Congress that similar experiments on humans are completely unacceptable.

"The basis of all these initiatives is utilitarian attitude towards human life. Such thinking is unacceptable.

"Scientific progress shows that a human being is indeed the image of God, endowed with the highest gifts of personal freedom, reason and creativity. Unfortunately, these gifts can be deployed against the person. That is why the Church draws a clear distinction in the scientific advances that may affect humans. If we talk about cloning, we have no objection to the development of new breeds of animals, a separate human organs and tissues, but it is unacceptable to satisfy scientific curiosity, turning human life into an experiment."