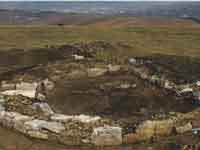 The remains of a previously unknown settlement of the Bronze Age were discovered in Russia's Caucasus in October of 2010 with the help of an aerial photo, which was taken 40 years ago. Researchers have already dubbed the finding "Stonehenge in the Caucasus." Archeologists believe that the recent discovery will make scientists take a new look at the history of colonization of the region during the second millennium B.C.

Archeologists have discovered nearly 200 settlements on the highland plateau in the Kislovodsk basin - from the Kuban River to the Malka River (towards Elbrus Mount). The newly recovered data were exposed at the round-table discussion in Kislovodsk last week.

The remains of ancient settlements are situated at the height of 1,400-2,400 meters above sea level. All the settlements have one and the same construction plan. There is an oval-shaped square in the center with straight streets coming out in various directions, like sun rays.

The central square was surrounded by a circle of two-room constructions that have been preserved as massive rock foundations. Some of them are rather tall (more than a meter high), and scientists may only guess why such constructions were erected.

Such a construction plan is very reminiscent of renowned Stonehenge in England, the mystery of which is still unveiled. There is every reason to believe, though, that ancient people were living in those constructions: fragments of ceramic vessels, decorations and household bronze items were found near the rock basements.

No burial ground was discovered near the settlements. This became a surprise to researchers because the people of the Bronze Age normally arranged graveyards near their places of residence. Scientists believe that the strange constructions might have been created for ritual purposes.

The analysis of the finding revealed that all of the recovered items date from the so-called Koban culture - IX-VI centuries B.C. The culture, discovered for the first time at the end of the 19th century near the village of Koban in North Ossetia, can be traced in many Bronze Age burial grounds in the Caucasus.

Dmitry Korobov, one of the researchers, who took part in the mission, stated that the discovery of the ancient civilization became possible owing to old black-and-white photos taken during the Soviet era. One of the pictures, taken from an aircraft in 1970, depicted a stone structure in the mountains.

It is not clear how the people who lived in the discovered ancient settlements came to the Caucasus and where they lived before. Most likely, the migration was based on serious climate changes as it happened many times in various regions of the globe. A sudden increase of temperatures could make local tribes look for more comfortable places of residence. Some of them decided to settle in the locations with cooler climate - in the mountains, high above the sea level.