The greatest sex yet to be! 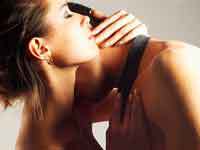 Will there be sexual relations in heaven? Some say "No" because Jesus says in Matthew 22:30 that we will be like the angels. But, in the context of what Jesus was talking about in Matthew 22:30, what Jesus meant is that we will be like the angels in that there will be no marriage in heaven. A question was given to Jesus concerning a woman who had several husbands in her lifetime (each husband having died and the woman outliving them all). The question given to Jesus was who will be the woman's husband at the resurrection since she had several husbands. Jesus responds by saying, "For in the resurrection they neither marry, nor are given in marriage, but are as the angels of God in heaven" (Matthew 22:30, KJV).

In heaven no one will belong exclusively to one person and there will be no building of families in heaven as marriage involves. Only in this sense will we be like the angels because angels do not marry. But, we will not be like the angels in every other sense. For example, the Bible teaches that we will continue to be able to eat and enjoy food in our resurrected bodies, but angels are strictly spirit beings and don't eat food.

On earth sex is reserved for marriage, but that doesn't mean that sex in heaven must require marriage. In this life sex within marriage also is a test of faithfulness, but in heaven no such test is necessary for only the faithful will be there. But, if there is sex in heaven it will be driven spiritually and by perfect love. It will not be driven by lust or the body and, yet, it will be more enjoyable for soul and body than any sex on earth. It is not something that we can now imagine in our fallen, selfish, and sinful state.

Perhaps, in heaven couples will have sexual and intimate relations with one another for a period of time (if we can call it "time") and then move on into new relationships with others and so on. In Genesis, the Bible describes the sexual relationship between Adam and Eve as involving the soul. We read in Genesis 4:1 "And Adam knew Eve his wife; and she conceived ..." Adam knew his wife. To know someone involves the soul, the mind. This is how the Bible describes sex. In human sexuality, where there is trust and love, the mind, emotions, are involved in the physical relationship between a man and woman.

Human sexuality is a deep hunger of the soul as well as body, involving communication of soul to soul as well as that of body to body, and this is so because the communication involved in human sexuality is an expression of the essence and nature of God. Human sexuality involves romance and foreplay. Read the Old Testament Book "Song of Solomon" and you cannot but conclude that the book portrays in poetic metaphors, image, and language human sexual foreplay and union between husband and wife. Certainly such love, romance, and sexual foreplay don't reflect sexual activity in the animal kingdom.

The Bible teaches in Genesis that God created Adam and Eve in His image and that the image involves maleness and femaleness (Genesis 1:26-27). God's image is not limited to sexuality but sexuality is partly involved in making up that image. Some say that the image of God cannot include sexuality because animals also have male and female sexuality. But, again, animal sexuality and human sexuality are universes apart. Animal sexuality only involves reproduction. Human sexuality involves communication of the spirit and soul as well as that of the body. In the New Testament the human sexual union itself between a husband and wife is used as a picture of Christ's spiritual relationship with the Church, the body of all true believers in Christ (Ephesians 5:31-32).

The Bible expresses God as having both feminine and masculine characteristics. For example, sometimes God is pictured in Scripture as being nurturing as a mother. Both masculine and feminine are complementary not contradictory. It is the communication of give and take involved between male and female. Within God this give and take is perfect without selfishness or sin. Within God's nature is both male and female. God is both. God has a fully male psyche and a fully female psyche in perfect complementary balance.

Why, then, does God refer to Himself as "He" in Scripture? One reason for why God mostly identifies with the male role is because, after the fall of Adam and Eve, God had designed for the man to be the head of the household. Positionally, Eve was not put under Adam's authority until after the Fall (original sin). She was put under Adam's authority because she was the first to sin. Because of sin and the selfishness that comes from sin there cannot exist two equal heads of a household. For the better or worse one has to be in charge and be accountable for the whole family. Genesis is clear that only after Eve and Adam sinned was Eve put, positionally, under Adam's authority, although both are equally created in God's image and stand equally in worth and value before Him.

The Bible teaches that there will be both spiritual and bodily enjoyment in heaven. For example, Psalm 16:11 tells us that in God's presence there will be fullness of joy (this is spiritual) and at God's right hand there will be pleasures (plural) forevermore (pleasure is something experienced physically).

When we who know Christ as our personal Lord and Savior are finally with Him then the full spiritual meaning of eating bread and drinking wine during communion will be fully realized or fulfilled, but that doesn't mean because the type is fulfilled in heaven that there won't be anymore eating and drinking. It Even Jesus said that He would drink the fruit of the vine with His disciples in the Kingdom.

The Bible says that we do all things in life for the glory of God, even our eating and drinking, and, yes, our sex too. In this sense everything is spiritual because it is done with God in mind. When God is given thanks for the food we eat then eating and enjoying that food has a spiritual component. That's what is meant by glorifying God in all we do.

Enjoy God, my friend, and some day everything and all enjoyment, physical as well as spiritual, will be yours for eternity. The Bible says, "For God so loved the world that He gave His only begotten Son, that whosoever believeth in Him should not perish, but have everlasting life" (John 3:16, KJV).

The Bible says that God will not withhold any good thing from His people.

Below are a few Internet sources, the writings of Dr. Peter Kreeft and Lambert Dolphin, which the reader will find extremely helpful concerning the subject of God's image and human sexuality:

The author, Babu G. Ranganathan, has his bachelor's degree with concentrations in theology and biology and has been recognized for his writings on religion and science in the 24th edition of Marquis "Who's Who In The East". The author's articles may be accessed at www.religionscience.com. The author's recently published (illustrated) children's story "The Selfish Apple Tree" is available through WestBow Press.