We are not alone. The name is Gliese 581g, a planet recently declared to be not only habitable, but one hundred per cent certain to host life. Now, the latest discovery: an alien communications signal is being sent from this very same location in space. Scientists are hardly surprised... 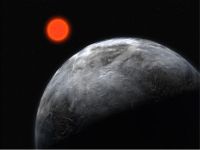 Scientists estimate that the Milky Way galaxy alone contains some 200 billion stars and if between ten to twenty per cent of these hold life, that means some 40 billion habitable planets in this galaxy alone. The US-based investigator and writer, Terrence Aym*, claims in his article "Scientist declares alien signal sent from extrasolar planet Gliese 581g" that a reputable Australian astrophysicist, Dr. Ragbir Bhathal, from the University of Western Sydney, has stated that "the light pulses he detected in December 2008 are from the region of space where the extrasolar planet Gliese 581g orbits a red dwarf star".

Aym points out that Professor Steven Vogt (Professor of astronomy and astrophysics at the University of California) had already declared that Gliese 581g was inside the habitable zone of a star and claimed that "given the ubiquity and propensity of life to flourish wherever it can, I would say, my own personal feeling is that the chances of life on this planet are 100 per cent".

Dr. Bhatal is a member of the Australian chapter of SETI (Search for Extra-Terrestrial Intelligence), which is a non-profit making scientific organization conducting research, exploration and education in the area of astrobiology/exobiology (the study of life forms in space). On finding the rare pulse of energy in December 2008, he declared "Looking at one of the objects, we found this signal. We found this very sharp signal, sort of a laser lookalike thing which is the sort of thing we're looking for - a very sharp spike. And that is what we found".

Although there are sceptics in the scientific community, among them SETI pioneer Prof. Frank Drake, former director of the Arecibo radio telescope in Puerto Rico, who states he needs to see evidence first, the signal is puzzling. For a start, the signal was found around two years before its origin - the planet Gliese 581g and before it was discovered that the star Gliese 581 was orbited by planets (presented to the National Science Foundation in the USA by professors Vogt and Paul Butler (Carnegie Institution, Washington) in September 2010.

Secondly, it is an extremely unusual signal coming from a habitable planet around twice the size of Earth. One fact is staring us in the face and becomes more and more obvious, surpassing the apparent: We are not alone.