Time will stop in 3.7 billion years 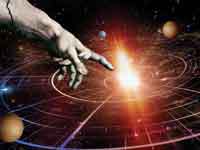 A group of physicists from the United States and Japan argued that, according to their calculations, there is a 50% probability that the time will "cease to flow" in the next 3.7 billion years. However, other theorists are extremely skeptical about their conclusions, calling the authors "sophists."

The universe was formed approximately 13 billion years ago as a result of the  Big Bang and since then continuously expanded. Also, all data from the observable part of space suggest that this expansion is accelerated, which means that the universe will expand indefinitely.

Rafael Bousso of the Center for Theoretical Physics, University of California at Berkeley and his colleagues rebelled against the idea. In their article posted in the electronic library at Cornell University, they claim that the infinitely expanding universe cannot exist because the laws of physics do not work in infinite space. For these laws to make at least some sense, the universe must be finite, and they calculated the most probable date when it will end.

Endless inflation (expansion of the universe) has several important consequences. Any event in it, which has non-zero probability, will happen an infinite number of times, the scientists say. But if there is an infinite number of each possible observation, it becomes impossible to determine the probability of any event. The laws of physics simply do not apply to this situation.

The only way out of this conundrum, the authors of the article say, is to assume some type of disaster that would end the universe. Then all the probabilities again become meaningful and the laws of physics will regain power. The time is unlikely to come to an end in our time, but there is a 50% chance that the time will stop in the next 3.7 billion years, they wrote. This means that the end of times will happen during the lifetime of the Sun and the Earth.

However, Rafael Bousso points out that although it is unknown what type of disaster will lead to the end of time, humanity will not be able to see when it happens. In other words, people "will fly into" the disaster at full speed before they have time to see some of its impact.

Other theorists are extremely skeptical of this work, as well as other works of Bousso. "He is a fan of sophistry, a modern Zenon," said Alexei Starobinsky, chief researcher of the Institute of Theoretical Physics of Landau. According to him, the statement of the authors that if there is the end of time, it cannot be observed in normal human understanding means that there is no end of our time there.

Starobinsky notes that Bousso and his team have misunderstood the phrase "eternal inflation."

"It must be understood not literally, but in high philosophical sense - as we understand the thesis "matter is eternal." But our universe (or more precisely - the observable part) was at the inflationary stage in the past for a finite period of time," said the scientist.