Samsung and Apple get ready for tablet competition in Russia 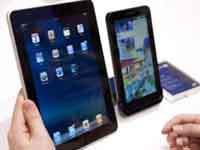 Samsung's Galaxy Tab is going to hit the Russian market at the end of October. In retail networks, the tablet is going to be priced at 40,000 rubles ($1,300), RIA Novosti reports with reference to the Russian division of Samsung Electronics.

In the meantime, Apple's iPad will finally reach Russia officially in October too. The price of Apple's hugely popular table will be much lower in comparison with that of Samsung - about 30,000 rubles ($1,000). If the above-mentioned information is confirmed, it will be very hard for Galaxy Tab to compete against iPad in Russia.

On the one hand, iPad is heavier, has no camera, does not support USB and Adobe Flash technologies. On the other hand, Apple's tablet has a larger display and highest quality interface.

Goldman Sachs analysts said that Apple was going to launch a new generation of iPads, in which most of the above-mentioned disadvantages will be removed.

Samsung, however, hopes that original content will boost the promotion of its new device on the Russian market. The Russian version of e-books sale service (available for Samsung Android and Baidu devices) has more than 60,000 electronic books. However, not all of those books are in Russian, not to mention the fact that the cost of some of them is nearly the same as the price of paper versions. Many competitors sell their e-books at much more attractive prices.

Galaxy Tab uses Layar augmented reality browser, which displays the picture from the inbuilt camera supplemented with information about surrounding objects - restaurants, stores, parking lots, places of interest, etc. In Russia, this application will use the content from Tele Atlas.

Samsung Galaxy Tab based on Google Android 2.2 was unveiled to the general public at IFA in September in Berlin. It was promised that the sales of the new device would begin in about a month. Galaxy Tab is the first tablet by the South Korean giant.

The device has an 7-inch diplay, supports sms and mms message service and weighs 380 grams.