Now they will start taxing the air we breathe?

Back in 1962, American poet Edward Estlin Cummings predicted a changing natural order which spelt catastrophe for humankind and our environment. And he was right: new research reveals that the Earth is running out of oxygen, and fast. The gas tax today will morph into a water tax tomorrow and eventually, yes, they will tax the air we breathe. 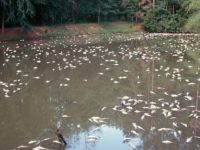 Back in 1962, the progressive American poet Edward Estlin Cummings wrote the poem "When serpents bargain for the right to squirm" forecasting a world in which "serpents bargain for the right to squirm and the sun strikes to gain a living wage" and where "any wave signs on the dotted line or else an ocean is compelled to close", ending with a claim that when mankind has actually started to gain control over nature, then we can finally believe in this "unanimal".

Unfortunately, it seems to have happened already not fifty years since he wrote these wise words. New research by US-based researcher Terrence Aym* reports data which points towards an alarming and life-threatening trend: the Earth is running out of oxygen.

Aym's research in his article "Stunned scientists warn world could run out of breathable air" uses, among many credible scientific sources, data from Professor Ralph Keeling, of Scripps Institute, who produced the Keeling Curve, measuring the trend of oxygen supply in the world's atmosphere. The bottom line is that the supply of this life-supporting gas is diminishing.

The article claims that the once-abundant gas, which constituted around one third of the atmosphere (now it is down to between 19 and 21 per cent) and which was responsible for the enormous size of many species of animals is now reaching startlingly low levels, to such an extent that dead zones, where oxygen no longer supports life, have already started to appear in the oceans and have expanded to 4.5 million square kilometres, half the size of the United States of America.

As the dead zones expand, scientific research revealed by Terrence Aym points towards a possible further depletion by 20 per cent in the near future.

Scientists make a direct link between unusual solar activity over the past ten years, the effect of this on volcanic eruptions, emitting more CO2, methane and sulphur into the atmosphere, disasters such as the Deepwater Horizon and forest fires, emitting huge quantities of methane gas, leading to the displacement of oxygen.

The research, based on several credible scientific sources from renowned universities and research institutes, leaves the reader gasping...as indeed we will be if this nightmare scenario comes true. And everything indicates that it will.