Stephen Hawking, celebrity media, and the poverty of physics 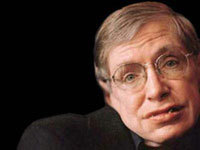 When Stephen Hawking, a prominent physicist, recently made headline news because he changed his prior view about the existence of God by saying now that "it is not necessary to invoke God" at all to explain the origins of the universe, what is shocking here is not his new view about religion but about his notorious reputation of making bold claims over the years but only later retracting them in embarrassment.

This is all the more embarrassing for a prominent physicist, whose words are often taken seriously by celebrity media, with the tragic consequence of contributing to the poverty of science (or physics in the present case).

Let me give five historical evidences (about his notorious reputation of making bold claims over the years but only later retracting them) hereafter to support this important point.

However, Hawking later changed his mind and revised this view about parallel universes, which disappointed some fans in science fiction.

The second evidence has to do with his view of God. In "A Brief History of Time" (1988), Hawking made the bold claim that once a unified theory of physics was successfully worked out, "it would be the ultimate triumph of human reason -- for then we would know the mind of God."

However, Hawking now changes his mind and argues in "The Grand Design" (2010) that "it is not necessary to invoke God" at all to understand the working of the universe.

The third evidence has to do with his work on "black holes." Hawking once made the bold claim that light cannot escape from a black hole and even made a bet in 1991 with Dr. Kip Thorne and John Preskill, in that "naked singularities are an anathema and should be prohibited by the laws of classical physics," as reported by George Johnson in "What a Physicist Finds Obscene," which appeared in The New York Times on February 16, 1997.

However, in 1997, Hawking changed his mind and conceded his defeat in the bet with Thorne and Preskill, when "a computer simulation by Matthew Choptuik of the University of Texas/Austin showed that a black hole can collapse, under very rare and contrived circumstances (at least in this computer simulation). And it can happen in such a way that its singularity would be 'naked,' that is, exposed for all to see," as I already explained in my book titled "The Future of Human Civilization" (2000).

However, in a 2005 article titled "Gödel and the End of Physics," Hawking changed his mind and even suggested that such a quest is not possible, because of Gödel's incompleteness theorem, as he thus wrote: "Up to now, most people have implicitly assumed that there is an ultimate theory, that we will eventually discover. Indeed, I myself have suggested we might find it quite soon. However, M-theory has made me wonder if this is true....This is very reminiscent of Gödel's theorem. This says that any finite system of axioms is not sufficient to prove every result in mathematics."

And the fifth evidence has to do with the field of "inflationary universe." Alan Guth at M.I.T., who is known as the originator of the inflationary universe theory, recalled (in his 1997 book titled "The Inflationary Universe: The Quest for a New Theory Of Cosmic Origins") a conference many years ago when he and Hawking were both relatively young and where he met Hawking and discussed with him about his (Guth's) different view on the origins of the universe (which opposed Hawking's view).

However, to Guth's surprise, Hawking later revised his paper presentation and changed his initial view about the origins of the universe by adopting the specific inflationary model as proposed by Guth (but without explicitly giving him the credit).

Surely, there can be other evidences about Hawking's notorious reputation (of making bold claims over the years but only later retracting them), so the five evidences (as given above) are merely illustrative, not exhaustive. Lest misunderstanding occurs, the important point to remember here is not that Hawking is a not a good physicist. On the contrary, it is well known that he has made good contributions to the fields of cosmology and quantum gravity (especially in relation to black holes).

However, celebrity media has so often taken seriously every single bold claim that Hawking had ever made, without critically putting these claims in the historical context of his notorious reputation of changing his views all so often, to the point that one cannot help but wonder if he knows what he is talking about, whenever he makes some bold claims, especially on issues which fall outside his expertise in physics.

In this light, the recent story about his new bold claim about God constitutes only the latest chapter of his notorious reputation of making bold claims but only later retracting them. This is all the more serious when the public has much sympathy towards him because of his suffering from his illness, that is, a motor neuron disease known as amyotrophic lateral sclerosis (ALS), which has severely disabled him.

This has made him appear larger than life, to the point that celebrity media has exempted him from critical scrutiny which would have easily befellen someone else with lesser prominence and in good health.

Celebrity media does not want to be critical to a severely physically handicapped man, because of its political incorrectness in our time.

About the Author: Dr. Peter Baofu received his Ph.D. from M.I.T. and is the author of 36 books, in which he proposed 45 new theories in different fields, ranging from the natural sciences and the formal sciences through the social sciences to the humanities, with the final convergence into a unified theory of everything.