A flying saucer. Made in Russia 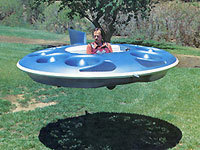 Being a Russian inventor is the fate of honor, but at the same time it is not an easy one. It is often difficult to get recognition in Russia. But abroad, Russian "Kulibins" are literally awaited with the open arms: often it turns out that the know-how originating from Russian people work for the benefit of other countries. Maybe it is time we pay attention to them?

In the arsenal of devices created by Tyumen inventor Eugene Bugrov one can find very diverse projects: from a flying saucer to the engine operating on the energy of plasma. The latter, incidentally, present interest for foreign companies.

A former pilot, Eugene Bugrov is very popular in Tyumen: he claims a place of honor in the "Book of Records of the Tyumen Region" as one of the most productive inventors of the region.

By the way, Eugene already has several awards and gold medals at international forums for the development of some innovations including "flying saucer" and new generation power station. The inventor, fortunately, was noticed by domestic companies and foreign colleagues, who, naturally, would like to have such novelties in their arsenal.

Just a couple of years ago Bugrov's projects were considered unprofitable. His proposals on the implementation of the developments were declined due to the fact that in times of crisis, they were deemed economically non-feasible, and no one wanted to invest in long-term projects.

Nonetheless, he found some like-minded people who supported the inventor. As a result, an entire technical team works on projects along with Eugene. He also received the "blessing" from major research centers for further development of the plasma engine and power plants. And it seems like Bugrov's flying saucer will soon surf the air space of the universe, since the invention is already patented.

Among the developments of Bugrov are "spider-man's suitcase," which will enable people to escape from burning high-rise buildings, down the steep walls. And the inventor is ready to show off his sword of the Jedi from Star Wars. He invented a laser that can cut rock and metal.

However, Russian manufacturers, unlike the foreign ones, are not interested in the engine running on plasma. This invention can compete with oil producers and gas extraction. Bugrov also does not deny that this development may be relegated to other countries.

"If the entire economy is tied to oil, why would our businessmen need cheap energy? We are their competitors," says the inventor. "So many ideas go abroad. But I would not like, for example, to just leave here for good".

Russian companies and research centers should not waste their time. So many useful inventions are gathering dust on the shelves or have been sold abroad. And yet, they could make life easier for the Russians. For example, the development of Russian rocket scientists, which can suppress the explosions and extinguish the spark. The device is called "generator of explosions suppression," and has already passed the first test.

Scientists working on this project started from the fact that any fire starts with a fiery outburst. And if you prevent it, a fire can be avoided. A device that detects and instantly suppresses the first spark by injecting a special substance at supersonic speed was designed. Virtually, a device for fire prevention has been invented.

In addition, the same group of inventors has developed a water cannon which suppresses powerful flames. The device reminds missile compartment and can accommodate up to 7.5 tons of fire-fighting formula. It can be transported by helicopters, but unlike traditional water reservoirs, its design prevents splashing of water in different directions. The liquid from this water cannon is knocked out by a blast, and the fire immediately goes out because of the intense impact.

If similar devices were not gathering dust on the shelves, but were put into mass production, we could have reduced the amount of losses resulting from the recent Russian raging fires.

It is a pity that the phrase"would be nice" remains just that, a phrase. It is also possible that Russian technology will be purchased by other countries, and then Russian will be asking to "use" them for hefty amounts.