Ongoing natural disasters, the melting of ice on the poles of the Earth and the rise of water level in seas once again reminded of a trendy horror story called "global warming." Reasonable arguments both for and against the warming have not been presented to the general public. 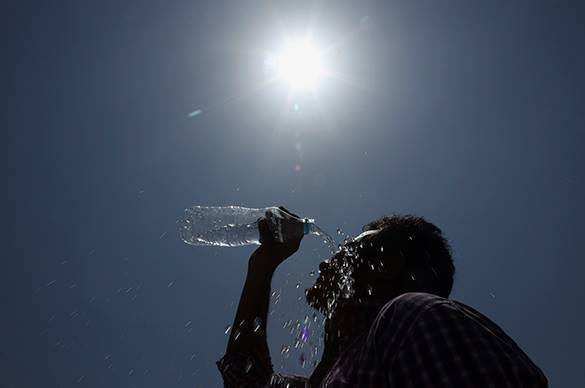 There is an old joke about a weather station in Chukotka.

Once the Chukchi came to their shaman and asked him whether it will be a cold winter. He replied that the winter will be cold, and told them to gather plenty of firewood. But after some time he decided to test his prediction, and went to the nearest weather station. Meteorologist looked out of the window, and told the shaman, that winter, no doubt, will be cold, since the Chukchi are actively collecting firewood.

Studies by many scientists who promise global warming are not much different from observations of that meteorologist. If you analyze all the methods they use, it is astonishing that at least something can be predicted on the basis of their findings.

The focus of studies on global climate processes is traditionally given to the study of CO2 and other greenhouse gases in the atmosphere. Indeed, the increase in the proportion of these gases in the air envelope of our planet, according to scientists, leads to the so-called greenhouse effect, where CO2 is formed from a certain "film" that interferes with the transferring of heat from the ground to the cold outer space. Scientists in many countries are concerned that because of human emissions of this gas into the atmosphere is ever-increasing, which may result in greenhouse effect in the coming years.

Here it gets interesting. First of all, no one can say exactly how much CO2 is emitted to the atmosphere every year through human activity. American researchers name the number of 5.5 billion tons, Australian - 7.2 million tons, Russian - roughly $10 billion. The one who sees such a discrepancy immediately raises the question - but where do these numbers come from? How exactly the measurement of this "dangerous" gas is taken?

As it turns out, there is no single accounting method. Some count the amount of industrial and automobile exhausts of enterprises in industrialized countries and multiply it by the number of days per year, excluding weekends and holidays. Some measure the total amount of CO2 in the atmosphere within several years and then blame all carbon dioxide on human activities. Others generally calculate this number based on the dynamics of mining and fuel production.

It is obvious that the data obtained by some methods says nothing. Here is an example. Assume that we know exactly how much CO2 is emitted into the air by a specific factory. But it is unclear how much gas remains in the atmosphere, because soon, for example, a field of wheat can easily dispose of the entire exhaust (as we know, plants need carbon dioxide for photosynthesis). No one conducted research on how much carbon dioxide is produced by the man, or is consumed by plants and phytoplankton.

Much more reliable is the method of systematic measurements of carbon dioxide in the atmosphere. But there are some difficulties. The man is not the only "polluter" of Earth's atmosphere; CO2 is duly delivered to the atmosphere by most living organisms on our planet, and volcanoes. The World Ocean alone, according to American researchers, annually emits approximately 90 billion tons of this gas. How can we distinguish between "man-made" CO2 and the "natural" one, is not quite clear.

Moreover, scientists still do not know anything about natural oscillations of carbon dioxide in the atmosphere. Nobody knows anything about the reason why the ocean sometimes emits more, and sometimes less. But if so, why some researchers are adamant in saying that recently the quantity of "man-made" CO2 emissions has increased? What if it is not "technological" but "natural" emissions?

As you can see, there is no single system for calculating the amount of greenhouse gases in the atmosphere, but also there is no unified methodology to interpret the data. And, most interestingly, the similar "chaos" is observed in studies of changes in average temperature on Earth.

Here scientists in each country mainly use their own weather station data, and then make conclusions of "planetary" scale. But it is not a secret that if a weather station, for example, in Moscow, recorded a steady increase in temperature, say, in the summer period, then such law will be followed throughout the world during the same time. The same weather station somewhere in Lima can, conversely, record a steady decrease in temperature. A consolidation of all data in one table is not done by anyone at least because many of the meteorological observations are made by the order of the military and, therefore, constitute a state secret.

The same can be said about other symptoms of the so-called warming - for example, rapid melting of ice in the Arctic and Antarctic. Satellites can only observe the process, but no one can explain why this happens, since this is registered for the first time. In addition, researchers often do not take into account other possible causes that lead to similar results. What if it is some warm unaccounted underwater current or a volcano are being mischievous?

Anyway, if we recall that the systematic study of the climate began just over 100 years ago, we can confidently say that people still know very little about its effects on our world. The likelihood that a scientist, focusing on observational data of the past years, will be able to make an accurate prediction of global climate change is approximately equal to the probability that a child of three, who barely learned to stammer, will suddenly prove the Pythagorean Theorem.

So, talks about global warming, as of a proven fact, are perhaps a bit premature, if only because there is no single method of investigation of this phenomenon. We must first develop it, then create an international group of researchers equipped with its standard equipment and leave them alone for 50 years that way. Let them work.

After this period, ask the group to report on progress and then decide if the Earth is warmer or colder on the basis of the results. Then, there will be at least some basis for such global conclusions.