The first hurricane of the season is called Alex. It is classified as Category 1 and its winds record 120 km / h. Not very powerful, but it has something more sinister that previous hurricanes had not: the oil spill from the Deepwater Horizon in the Gulf of Mexico and it is precisely in this region that this hurricane is expected to strike. 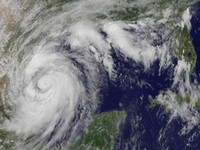 At this moment in time the storm covers one third of the western Gulf. The hurricane's eye right now is 145 miles east of La Pesca, and 190 miles southeast of Brownsville, Texas, USA. It moves to the northwest at 10 km/h.

There are hurricane warnings in some areas (between La Cruz, Mexico, and northern Baffin Bay, Texas, USA) and Tropical Storm warnings between Baffin Bay South and Port O'Connor, Texas, and between La Cruz and Cabo Rojo. The storm is expected to hit land during the night of Wednesday or Thursday morning. Then we shall see what an ecological disaster is.