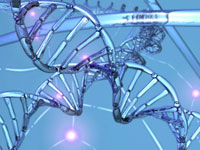 Young people, and even adults, often wonder how all the varieties or "races" of people could come from the same original human ancestors. Well, in principle, that's no different than asking how children with different color hair ( i.e., blond, brunette, brown, red ) can come from the same parents who both have black hair. Just as some individuals today carry genes to produce descendants with different color hair and eyes, humanity's first parents, Adam and Eve, possessed genes to produce all the variety and races of men. You and I today may not carry the genes to produce every variety or race of humans, but humanity's first parents did possess such genes.

DNA is located in the nucleus of our cells and is made up of smaller molecules called nucleic acids. These smaller molecules in DNA are arranged in a sequence, just like the letters in a sentence. The sequence of these nucleic acids tell the cells in our body how to build our nose, eyes, hands, feet, and everything else. If the sequence for a particular trait isn't in our genetic code then our bodies won't build it. If the sequence for producing wings is not in the genetic code of an animal then that animal will not develop wings regardless of the environment. Many people have wrong ideas about evolution.

For example, in November of 2004, articles appeared in major U.S. newspapers saying that running may have contributed to the evolution of man.

The simple fact is that physical traits and characteristics are determined and passed on by genes - not by running or any other form of exercise. Any physical changes from exercises that are performed do not affect the genes and will not be passed on. For example, you cannot pass on a sun tan to your offspring even if you could live thousands of years in a tropical country getting a nice dark tan under the hot blazing sun. Traits or characteristics which are acquired from the environment simply cannot be passed on to offspring (i.e. a woman who loses her finger will not cause her baby to be born with a missing finger; changing the color and texture of your hair will not affect the color and texture of your children's hair. Even if an ape ever did learn to walk and run upright it still would not be able to pass on this trait to its offspring. Only the changes that occur in the genes (genetic information) of reproductivecells ( i.e. sperm and egg) can be passed on to offspring. That is a simple fact of biology.

So, natural selection is just another way of saying "Survival of the Fittest". But, this is exactly the problem for the Darwinian theory of macro-evolution. How can a partially evolved species be fit for survival? A partially evolved trait or organ that is not completely one or the other will be a liability to a species, not a survival asset. The only evolution (real evolution) that occurs and is possible in nature and that can truly be called "science" is micro-evolution, which is variations within biological kinds such as varieties of dogs, cats, horses and cows. Only micro-evolution is observable and can be measured by the scientific method.

Macro-evolution, which teaches that variations in life can occur and did occur across biological kinds, is not science but modern mythology. Macro-evolution is blind faith!

Mutations produce only variations of already existing genes or traits, but they do not produce entirely new genes or traits. Mutations may lead to duplication of already existing traits (i.e. an extra finger, etc., even in another part of the body such as an eye growing under the armpit) but mutations will not lead to the formation of an entirely new trait. Mutations may even provide a new use in the body for an already existing gene but the gene will still perform the same function only within another area or context of the body. Random genetic mutations caused by environmental forces will not produce entirely new genes anymore than randomly changing the sequences of letters in a cookbook will change it into a book on astronomy. True mutations are accidents in the genetic code caused by radiation or some other random environmental force. Almost all mutations are harmful, which is to be expected from accidents. Even mutations that aren't harmful won't produce increasing complexity anymore than the random changes from an earthquake will produce a more complex building. Even if a good mutation occurred, for every good one there would be thousands of harmful ones with the net effect over time being disastrous for the species as a whole. Enough mutations would lead to actual extinction of a species instead of increasing complexity. There is no way evolution from simpler forms of life to more complex forms is possible via mutations! Almost all biological variations within a kind (i.e. varieties of dogs, cats, horses, cows, etc.) are because of new distribution and combinations of already existing genes and not because ofmutations.

It is not rational to believe that genetic information can come about by chance (i.e. random mutations) so it is much more logical to believe that genetic and biological similarities between species are because of a common designer rather than common ancestry. The Creator designed similar genes and biological functions for similar purposes in all of the various forms of life. God was the first genetic engineer! Even if evolution takes millions and millions of years, we should still be able to see some stages of its process. But, we simply don't observe any partially-evolved fish, frogs, lizards, birds, dogs, cats among us. Every species of plant and animal is complete and fully-formed.

Again, how could partially-evolved plant and animal species survive over millions of years if their vital organs and tissues were still in the process of evolving? How, for example, were animals breathing, eating, and reproducing if their respiratory, digestive, and reproductive organs were still incomplete and evolving? How were species fighting off possibly life-threatening germs if their immune system hadn't fully evolved yet? The fossilrecord contains fossils of only complete and fully-formed species.

There are no fossils of partially-evolved species to indicate that a gradual process of evolution ever occurred. Even among evolutionists there are diametrically different interpretations and reconstructions of the fossils used to support human evolution from a supposed ape-like ancestry. In fact, all of the fossils, with their fancy scientific names, that have been used to support human evolution have eventually been found to be either hoaxes, non-human, or human, but not both human and non-human. Yet, many modern school textbooks continue to use these long disproved fossils as evidence for human evolution. Evolutionists once reconstructed an image of a half-ape and half-man (known as The Nebraska Man) creature from a single tooth! Later they discovered that the tooth belonged to an extinct species of pig! The "Nebraska Man" was used as a major piece of evidence in the famous Scopes Trial in support of Darwin's evolutionary theory.

For example, once there is a complete and living cell then the code and mechanisms exist to direct the formation of more cells. The problem for atheism is how did life come about naturally when there was no already existing directing code or mechanisms in nature.

Chance processes in nature can only go so far (i.e. amino acids have been shown to come into existence by chance but not proteins which require the various amino acids to be in a precise sequence just like the letters in a sentence).

For a more comprehensive article, please read the author's Internet essay "The Natural Limits of Evolution" at: www.religionscience.com
Excellent articles and resources by scientists who are creationists may be accessed at: www.icr.org and www.creationscience.com.

The author, Babu G. Ranganathan, has his bachelor's degree with concentrations in theology and biology and has been recognized for his writings on religion and science in the 24th edition of Marquis "Who's Who In The East". The author's website may be accessed at www.religionscience.com