Cigarette Butts To Save the World from Rust 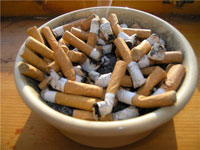 Cigarette Butts To Save the World from Rust

Chinese scientists have extracted chemical compounds from cigarette butts that can be used for anticorrosion treatments of steel items. In addition to saving material, using cigarette stubs to protect oil pipes can protect the environment from pollution. The research was conducted under the program aimed at cyclical use of consumer waste.

Every year, people around the world throw away approximately 4.5 trillion cigarette ends. These cigarette butts not only ruin the appearance of cities or parks but negatively affect the ecology. In particular, getting into water, they emit poisonous toxins killing fish. Chinese scientists state that in addition to utilization of cigarette waste, there is a way to rationally use it.

Specialists conducted the research where they placed cigarette ends into water. In the extract they received they found nine chemicals, including nicotine, anthraquinone and beta carotenes derivatives. Then they applied the extract onto steel N80 widely used in oil pipes manufacturing. It turned out that that mixture protects the metal surface very well, preventing further oxidation of metal. Corrosion process slowed down by 95% compared to control steel samples that were not processed. The researchers believe that the substances from the extract adsorb on the metal surface, creating a protective layer. It is worth mentioning that replacement and repair of rusty pipes cost oil manufacturers millions of dollars every year. Therefore, the discovery of Chinese scientists may be used to protect the pipelines serving to transfer oil. This will allow preventing pricey damages and interruptions in oil extraction. It looks like now disciplined Chinese smokers will be requested to bring cigarette ends to specials receiving centers.