According to the official space exploration program of the Russian Federation, the nation’s space agency, Roskosmos, does not see activities outside Earth’s orbit without cooperation with other countries. 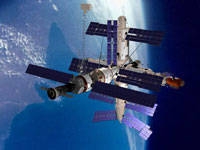 In the past, space exploration programs were based on national ambitions of the states which conducted those programs. The ambition to show the power of its science and technology made the Kremlin launch the world’s first-ever satellite and then first man in space. The White House stunned the world with its Apollo program.

The defeat of the USSR in the lunar race made Soviet scientists develop orbital stations Salyut and Mir. The success of the Soviet Union at this point was so impressive that it made the United States proceed in the same direction. In 1984, Ronald Reagan announced the start of works to develop Space Station Freedom with the participation of America’s friends and allies.

Tom Moser, the director of the program, clearly stated in 1987, when he tried to convince the Congress to fund the orbital complex, that Space Station Freedom would be developed to leave the Russians behind. The construction of the station with the participation of international partners was supposed to show that “free nations” could cooperate in space as successfully as communist ones (the Soviet Union was working on the Interkosmos program in cooperation with its political allies during those years).

The end of the cold war and the space race deprived the USA of its goals. Moreover, it turned out that coordinating efforts of different countries in one space project was a very complicated objective.

Space Station Freedom was supposed to enter orbit at the end of the 1980s. However, the designers of the complex, who had already spent $8 billion on engineering works, could only present a pile of documents to the president and the Congress. The program was eventually scrapped in the beginning of the 1990s. However, NASA suggested the White House should invite Russia in the project to celebrate the start of the new era in US-Russian relations and to build the complex faster, better and cheaper.

Russia helped in the solution of two vital problems in the program. It provided the service module (SM) known as Zvezda (Star) and Soyuz spaceships. The module, which provided some of the station’s life support systems, was launched to the station four years later that planned. US congressmen calculated that the delay resulted in the losses of $5 billion.

Russia was primarily responsible for the delay in the start of the exploitation of the complex, not to mention the increased spending. US congressmen repeatedly offered to either exclude Russia from the ISS program or simply purchase its service module.

Now it is obvious that if Russia had been deprived of its membership in the program, the space station would have stopped operating after the crash of Shuttle Columbia in 2003. Russia’s Soyuz and Progress booster rockets remained the only option to deliver cargoes and astronauts to the space station before NASA resumed shuttle launches. The fate of the ISS will solely depend on the Russian rockets after 2010, when the shuttle program is shut down completely.

If Columbia had not crashed, astronauts would have continued flying to the ISS and back on board NASA’s shuttles, whereas Russia’s role would have been much less important.

The problems connected with international cooperation between the members of the ISS project and their dependence on Russia and the USA made NASA’s John Logsdon come to conclusion that the ISS program experience was negative for its members.

As for the international cooperation in post-ISS projects, Barack Obama traditionally sees his major objective at this point in preserving America’s leadership in the organization of international efforts to explore the Moon, Mars, etc.

Unlike Russia, the USA has no official document related to the space exploration program that would stipulate the nation’s future dependence on cooperation with other countries.

The possible consequences of such dependence can be seen in the canceled program of another manned flight to the moon. If the USA had accepted Roskosmos’s request to include Russia in the project, the results would have led to lamentable consequences for Russia. Michael Griffin, a former head of NASA, said in 2006 that cooperation works best only if it is based on you-pay-for-yourself principle. Russia would have ended up with nothing if it had been accepted.

A look back at the history of space exploration clearly shows that most significant and technological progress was achieved at the time when it was connected with the solution of strictly national, not international problems of space exploration. Superpowers used space technologies to demonstrate their scientific and technological strength. This competition gave a powerful incentive to the development of space industries in Russia and the United States. International cooperation in space nowadays is impossible.