Seven dolphins and over 117 turtles have been washed up dead over the last two weeks on the shores of Louisiana, Mississippi, Florida and Alabama. While there is no evidence as yet that they are linked to the BP Deepwater disaster, the coincidence is very great. 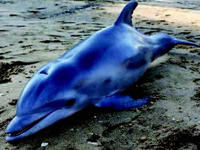 Scientists are still investigating the deaths, trying to find a cause, because none of the animals presents visual evidence as having been killed by the gigantic oil spill which has been belching 1 million liters of crude per day into the Gulf of Mexico since April 20.

Dr. Mobi Solangi, Director of the Institute for Marine Mammal Studies, declared to Reuters news agency that “There is no question that the oil is in their habitat” yet claimed that “so far we have not seen any relationship with the deaths of either the turtles or the dolphins to oil”.

The sea animals started to be washed up ten days after the beginning of the spill, from April 30. The results of the necropsies should come through by the end of the month.

Dr. Solangi also declared in his interview that dolphins can act like “a canary in the coal mine” and give advance warning to humans of an impending catastrophe. They are also at the top-end of the food chain, therefore is this a sign that the turtles and dolphins have been affected after consuming contaminated fish?

However, the authorities are not jumping to conclusions and are not yet linking these deaths definitively to the oil spill, due to the fact that at this time of year dolphins and turtles can be seen washed up on the shores and due also to the fact that some of these animals show signs of chronic sickness.

On the other hand, should the oil spill prove to be the cause, this could be the tip of the iceberg, especially for the turtle because the five species of sea turtle that inhabit this area are all endangered species.

Translated from the Portuguese Version