Bridging the Digital Divide: NEPAD Starts to Deliver in Africa

NEPAD, the New Partnership for Africa’s Development, was set up in 2001 to produce an African framework, run by Africans, for social and economic development in this continent. The latest success story is the NEPAD ICT Broadband Infrastructure Network, providing broadband Internet connections across the continent, bridging the digital divide and providing Africans with equal opportunities. 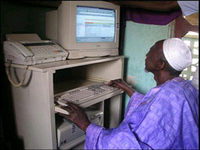 Bridging the Digital Divide: NEPAD Starts to Deliver in Africa

The days when one’s fate was decided by the accident of the birthplace are thankfully numbered. Disappearing is the world in which people were labelled according to which side of an invisible line they were born, which determined whether they were haves or have-nots, or whether they had access to services such as freedom of travel, education or healthcare.

NEPAD has been instrumental in providing frameworks staffed by Africans, for Africans, sorting out Africa’s problems without interference from ex-colonial powers which created the continent’s problems by carving up territories, dividing societies and drawing lines on maps. Providing solutions in a variety of areas including Gender Development, Science and Technology, Human Resources Development in Education and Healthcare, Governance and Capacity Development, Infrastructure, Environment and Climate Change, Agriculture and Food Security, Trade and Market Access, NEPAD’s latest success story is in the area of broadband Internet access.

In an age in which a child who does not have Internet access is at an immediate disadvantage, the Network has as its main aim the target to connect all African countries to one another and to the other continents through existing and planned cable systems.

NEPAD states, “The primary aim of the program is to integrate the continent so that commercial, social and cultural exchanges are easier and cheaper”. This will be implemented through submarine (Uhurunet) and terrestrial (Umojanet) networks.

There will be three main advantages of this new network. Firstly, it will reduce the digital divide by enabling digitally isolated communities to communicate via Internet; secondly, it will provide a cheaper and more affordable platform for regional and international communications, opening Africa’s communities up to the rest of the world and providing opportunities; thirdly, regional and international connectivity will have enhanced reliability and quality.

To date, the ACE Consortium and NEPAD have linked Western Africa to Europe through the Uhurunet submarine cable network, the first stage of a Pan-African project, a process which should be taken further at the e-Africa Commission’s governance bodies in Senegal from June 7 - 9.

After Africa has suffered so profoundly over so much time from scars caused by outsiders creating one-way channels for the exit of its resources into foreign hands, it is the duty of the international community to facilitate Africa’s development and to give its children an equal opportunity. It is time that the notion that someone’s chances are shaped by the place where (s)he was born is laid to rest forever.