A report supported by UNEP provides alarming evidence on the complete failure of humankind to protect the planet and guarantee biodiversity as a brutal assault on natural habitats coupled with a total disregard and disrespect for ecosystems has wiped countless species off the face of the planet, drastically reduced populations and destroyed their living areas. 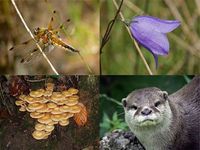 The United Nations Environment Program sponsored the report*. Its findings are as appalling a comment on mankind as they are shocking. Joseph Alcamo, UNEP’s Chief Scientist, claims “Since 1970, we have reduced animal populations by 30 per cent, the area of mangroves and sea grasses by 20 per cent and the coverage of living corals by 40 per cent”.

He adds that “These losses are clearly unsustainable, since biodiversity makes a key contribution to human well-bring and sustainable development, as recognised by the UN Millennium Development Goals”.

The lead author of the report, Stuart Butchart, claims that “Governments have failed to deliver on the commitments they made in 2002: biodiversity is still being lost as fast as ever and we have made little headway in reducing the pressure on species, habitats and ecosystems”.

The report is based on over 30 indicators which measure the various aspects of biodiversity. Taking into consideration the populations of species and their risk of extinction, extent of habitat and composition of the communities, it was revealed that there has been no significant change in the rate of decline of biodiversity.

The study, the first assessment of the targets established by the 2002 Convention of Biological Diversity (CBD), reveals that the 2010 goals for biodiversity have not been reached. Para Stuard Butchart, “the policies to slow biodiversity have been woefully inadequate and the gap between the pressures on biodiversity and the responses is getting even wider”.

The report does refer to the significant efforts being made by some nations which have brought some species back from the brink of extinction and which have recovered certain areas. Among these projects is the setting up of the Juruena National Park in Brazil, the recovery of the European bison in Eastern Europe and Russia and the protection of the black stilt (a wading bird) in New Zealand.

The report indicates that efforts to address the loss of biodiversity need to be substantially strengthened and sustained investment in coherent global biodiversity monitoring and indicators is essential to track and improve the effectiveness of these responses”.

For Ahmed Djoghlaf, the Executive Secretary of the CBD, “While many responses have been in the right direction, the relevant policies have been inadequately targeted, implemented and funded.” He added that the only way to address the problem is to integrate approaches “across all parts of government and business” and to account for the economic value of biodiversity in decision-making processes.

In other words, when Mankind discovers how much he will gain from protecting the environment, only then will he act. How sickeningly typical.

*The lead author of the paper, published in the latest edition of the Science journal, is Stuart Butchart of the UN Environment Program’s World Conservation Monitoring Center and BirdLife International.