In Kiev, Ukraine's manufacturer Antonov has unveiled its new An-158 regional twin-jet, a stretched variant of the baseline An-148. The jet complies with all modern standards and is one of the best in its class. The presentation of the 99-seat passenger An was intentionally planned before the visit of the Russian President to Ukraine. 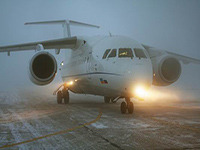 The cooperation between Russia and Ukraine with regard to An-70 and An-140 was re-commenced last year. The Russian leader ordered to include twenty units of An-124 "Ruslan" in the purchasing plan under the state armament program up to 2020. The external market reacted with 100 applications for the supply of the same planes. Two other units of Russian-Ukrainian An-148 will be purchased for the summer division of the President’s office.

Likely, Antonov may be considered as a part of large Russian-Ukrainian economic agreements and may even become a part of the United Aircraft Building Corporation. Kiev plans to complete review of the contracts for gas supply with Russia by April 26 and convince Moscow to lower gas prices. In the first quarter it was $305 for 1,000 cubic meters, the price for the second quarter is expected to be $330-$334 for 1,000 cubic meters.

According to “Ukrainskaya Pravda” referring to allegedly available draft of the agreement, this agreement provided for the transfer of the Ukrainian corporate group under management of a Russian state corporation.

A Russian leasing company “Ilyushin Finances Co” (IFC) acts as the company’s marketing and sales agent for An-148 and An-158. According to the data provided by the company, the portfolio of firm orders and pre-contract agreements for An-158 already includes over 20 units. “We have firm orders for 10 planes from “Atlant-Soyuz” company, as well as letter of intent for 25 units of An-158,” said the Alexander Rubtsov, the general director. “We expect to have orders for 100-120 planes in the future, like in case with An-148,” he added. The plane certification will be completed in the first quarter of 2011.

The new An-158 has more passenger seats, its passenger cabin is 2.5 meters longer, overhead storage bins are larger in volume, and its wings are modernized while fuel consumption and maintenance expenses are smaller. The plane can fit up to 99 passengers, but depending on the wishes of the client the passenger capacity may be decreased to 12 seats. The fuel consumption of the new model is 9% lower, and maintenance expenses are 12% lower.

The jet has a capability to land in any weather conditions on any runway strips, including unpaved. The plane has a ramp door and can do without airport mobile ramps.

Antonov chief Dmitry Kiva said that the price of An-158 will be in the range of $27-$30 million depending on configuration. Within the period of 12-15 years Ukrainian and Russian aircraft designers intend to assemble 250 units of An-148/158. "As an option we are discussing assembly of An-148 in Voronezh, and An-158 in Kiev", Kiva said. "We have orders and now we are preparing contracts. Next year we are planning to supply 10 units to the clients," he added.

Some experts believe that the 99-passenger seat version is a direct competitor of the most ambitious Russian aircraft project, SukhoiSuperJet-100. In terms of the level of readiness, it outruns the competitor’s project.