End-Game For the Gorilla?

In the DR Congo, the United Nations Organization has been forced to lend a hand to guarantee the survival of what is left of a family of gorillas, a species at risk of extinction, in danger of being eaten, sold as bushmeat or captured, three practices which have driven the populations of this docile and intelligent animal to the brink of extinction. 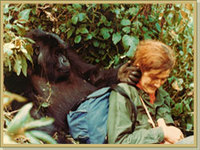 End-Game For the Gorilla?

The UN Mission in the DR Congo, MONUC, has been forced to step in to help a group of four gorillas (three females and a male), providing the logistics for a 50-minute helicopter evacuation to the village of Kasugho, after receiving urgent requests from the Dian Fossey Gorilla Fund and the Congolese Institute for Nature Conservation. This village hosts the Gorilla Rehabilitation and Conservation Education Center, where the animals are held before being released into the wild.

Already in decline in the 1960s, the international community was alerted to the plight of these animals by the American researcher, Dr. Dian Fossey, who set up the Dian Fossey Gorilla Fund International in 1978. By this time the communities of gorillas had decreased dramatically, and several species numbered 300 specimens or less.

Dr. Fossey’s Mountain Gorilla Project brought eco-and gorilla-tourism to Rwanda, educating local people on how they could protect the gorillas and the need to protect the parks. After a few years, gorilla eco-tourism became Rwanda’s third largest source of income. The American actress Sigourney Weaver aroused international awareness of Dr. Fossey’s project in the movie released in 1988 portraying the researcher’s work.

Violence among militia groups in the eastern DR Congo and the discovery of the lucrative trade in smuggled live animals for collections, or dead animals for bushmeat, together with the destruction of the forest where they live through commercial logging, has led to a situation whereby the gorilla could disappear completely from the Greater Congo Basin by 2025.

Now with the intensification of the fighting and the forced dislocation of people, the need for firewood and agricultural land has made further encroachments on the habitats of these gorillas (eastern lowland gorillas) meaning that they are far more visible and vulnerable to poachers.

Intelligent, gentle, sociable, peaceful and vegetarian, gorillas only become violent when the family unit is placed in danger (particularly the babies). As Alan Doss, MONUC Director, has pointed out, “Gorillas like to spend time at home with the family. They live in close-knit groups of five to thirty gorillas led by a patriarch”.

The only enemy of the gorilla is the human being. While in the past the communities of these animals were numbered in the hundreds, today as we can see, a whole community can be decimated and reduced to three females and a male. Sooner or later, Mother Nature is going to have a word to say about Mankind’s legacy on this planet. It will for sure not be pretty to hear.

Sigourney Weaver is the honorary Chairperson of the Dian Fossey Gorilla Fund International.