On April 12, 1961, Yuri Gagarin, then age 27, made history as the first human to fly in space, paving the way for manned exploration of the cosmos. The feat was performed on board the Soviet spacecraft Vostok I, which remained in orbit for 108 minutes at an altitude between 175 and 302 kilometers, making two orbits around the Earth and then landing successfully. Gagarin died on March 27, 1968 when during a routine flight, the MiG-15 he was piloting crashed near Moscow. 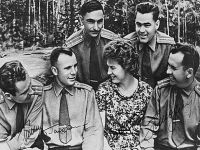 The race in space was a peaceful and scientific race for the good of humanity back in those days, and since that time has clearly been dominated by Russian know-how and ability. Yuri Gargarin continued and set a fire to the forward motion of firsts for the country.

Despite much ado about nothing, the moon landings, that dominant role has not changed. After 2010, who will continue to transport men, women and cargo to and from the ISS?

Gherman Titov quickly followed Yuri Gagarin in the same year on the 6th of August. He was the first man to spend a day in space and to sleep space.

The first transmission of telemetry from space was in 1959. In the same year, the first rocket to pass the moon and the first object to come into solar orbit (Luna 1) occurred. That same year, the Soviet program yielded the first photographs of the dark side of the Moon (Luna 3).

In 1960, two dogs, Belka and Strelka, returned to Earth after being in orbit (Sputnik 5). The first probe to Mars was in 1960 (Marsnik 1). The following year was the first probe to reach Venus (Venera 1)

Hundreds of entries were made in recent years. Foreigners were taken into space on Russian territory. Russia today does not look to the moon but to Mars. In Moscow a simulator is already preparing cosmonauts for the trip. A new space station is planned that will, in the future, be part of future trips to the Moon and Mars.

Unfortunately, we now only have pictures, film footage and monuments from the courageous life of Yuri Gagarin. On the positive side, however, we have his spirit alive among us to endeavour to preserve the peace and beauty of the planet and its inhabitants and to seek, explore and expand human knowledge and ability.