Bigfoot's Descendants Live Among Humans for Over 100 Years

35 year ago, the scull of the first Big-foot was excavated for the first time in history. People residing in the area for years still remember meeting it when it was still alive. 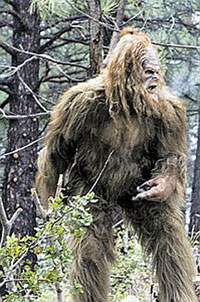 Bigfoot's Descendants Live Among Humans for Over 100 Years

Local residents who buried a mother and a son indicated location of their graves. A rubber shoe branded 1888 was removed from the woman’s burial (a mirror at the head indicated it was a female). Approximately the same time Zana, a Bigfoot, died.

The researcher’s heart was beating with anticipation of the unusual find, as never before scientists laid their hands on a Bigfoot, alive or dead.

The excavation was conducted by Igor Burtsev, at the time, a young scientist, and today a leading Russian cryptozoologist. He spent several years trying to obtain the right for graves excavation in the Abkhazian village Tkhina, where Zana used to live. As luck would have it, his old college friend, an Abkhazian, became a local official upon his return to the motherland from Moscow.

“I could not have seen Zana myself, she passed away 50 years before I was born,” says Apollon Dumava, former chair of the local Council. “But my older relatives remembered her. How could you forget her? She was 6.6 feet tall, had long strong arms covered with hair, curvy hips that inspired the desire of local men, large hanging breasts, flat forehead and huge red eyes.

Zana was very strong and easily carried 110 pounds sacks with grain to the water mill with only one hand.

Apollon said his father told him that Zana was caught in a gulch of the Adzyubzha River.

She was hunted down by a local merchant. Zana was incredibly smart and could disappear a second before she would be caught. Yet, the hunter outsmarted her. He left red male underwear at the meadow frequented by the hairy creature. She was caught while trying to put the underwear on her head and hips.

The captive was named Zana (zan means black in Georgian) and placed in a ditch enclosed with a fence made of sharpened logs. She was growling, throwing herself at kids who bothered her with sticks and dirt clods. Only a few years later, when Zana was slightly tamed, she was moved to a woven hut. She slept on the ground in a cave she dug out. She never learned how to use a spoon and a plate so she ate with her hands. She was always naked. She never learned to speak, but recognized her name. Zana could take boots off her owner’s feet. She was also great at imitating the sound of squeaking gate, and it made her very happy every time she did.

When Zana gave birth to her first child, she took it to a creek and washed it in ice cold water. The baby died. The same happened to her second child. After that, the locals decided to take babies from the silly mother. Her next children survived. There were four of them, two boys and two girls. People had no idea who their fathers were. Years later, before a census, children were assigned to a local resident Kamshish Sabekia, who acknowledged “playing” with Zana before he got married.

Locals remember Khvit the most. He was 6.6 feet tall, had grayish skin like his mother’s, thick curly hair and full lips. He had lived in Tkhina all his life and passed away in 1954 before he turned 70. Apollon remembers him well. Like his mother, Khvin did not like children who used to get into his garden to steal grapes and pears. Once Khvit had a fight with his relative and jumped him. Defending himself, his opponent hit him with a mattock and cut his arm along the elbow. The arm had to be amputated. Apollon has a memory of this incredibly strong person plowing his lot with one left arm.

Khvit was a human being, he could speak, got married twice and had two daughters and a son.

I was looking for his daughter in Abkhazia, but she was electrocuted a year earlier. I met with her son, Robert Kukubava, and asked him for permission to take pictures of his family album.

Faces of Khvit and his sister bear resemblance to Zana’s. Khvit’s older daughter Tatyana does not look like her grandmother apart from her eyes. Raisa and her brother Shuliko are undoubtedly Khvit’s children. They have similar lower jaws, protruding cheekbones, full lips and dark skin.

Within the last 30 years Igor Burtsev found nearly all Zana’s descendants. His main goal, however, was to find Zana, or, her skeleton and skull, as well as Khvit’s remnants.

Once, 35 years ago, a female skull was excavated at the Tkhin cemetery. Yet, the anthropological analysis provided evidence that the skull belonged to a black woman who somehow got to the Caucuses.

The skull of Khvit that Burtsev and I were looking at for a long time was only partly human.